Hong Sokyun the Earthbreaker, was the most powerful martial artist of the Four Guardians. He founded the Hongmoon School upon the values of compassion, selflessness, justice, integrity, and honor.

Thousands of years ago, at the height of the Naryu Empire, he fought alongside Mushin, Jiwan, and Iksanun, to defeat the demons and prevent Dark Chi from overwhelming the Earthen Realm. The Heavens selected him and his fellow warriors as the Four Guardians, charged with keeping the Earthen Realm at peace.

Thirty years ago, during the fall of Highland Central, he once again fought with his fellow Guardians against the darkness flooding the city. It was then that he witnessed Jiwan save a young Jinsoyun from falling to corruption. Jiwan then took Jinsoyun as her first and last student.

Years later, he arrived at Jiwan's Peak to witness Jinsoyun running down the steps holding her master's sword, the Twilight's Edge. Mushin accused Jinsoyun of killing her master and stealing her sword. Before Jinsoyun could say anything, Mushin and Iksanun attempted to strike her down. Surprisingly, the weakened Jiwan used her body to shield her innocent student, sacrificing herself. The distraught, grieving Jinsoyun took up her master's sword and attacked the guardians leaving Iksanun severely wounded and Mushin with a scar upon his face. Hong Sokyun then blasted Jinsoyun off of Jiwan's Peak to her supposed death.

Afterwards, he retreated from the world to Heaven's Reach where he founded the Hongmoon School. He took the Twilight's Edge with him for safekeeping, disguised as his walking staff. Though the school was popular, with martial artists traveling from all over the world to study the powerful Hongmoon Arts, Sokyun's declining health made it difficult to teach very many students. Eventually, the school was only composed of Jinyung, Gilhong, Hajoon, Yungmuk, Lusung, and the hero. 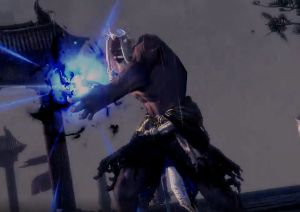 Master Hong, despite being ill with a persistent cough, calls his students for a meeting in front of the Master's Quarters where he once again reiterates the importance of following the Hongmoon Path and the secret to unlocking the Hongmoon Arts. He calls the hero, who had only been in the school for three years, into his room to accept the Martial Tome and become a full disciple of the Hongmoon School. He expresses regret that he cannot offer more personal attention to the hero as he is not feeling well and send the hero off to the Duel Hall to study with Yungmuk. While the hero is off at the Proving Grounds, Heaven's Reach comes under attack. Master Hong is engaged in a battle with Jinsoyun while his students are swiftly killed by her henchmen, Yura and Gubong. He is shocked at Jinsoyun's return, believing her to be dead. He looks around, saddened by his students' deaths before turning to fend off all three assailants.

Beaten down, he is surprised to learn that Lusung had been poisoning his medicine daily to weaken him and had betrayed the Hongmoon School. Angered, he releases his true strength and makes quick work of Jinsoyun before they take his last remaining student, the hero, hostage in exchange for the Twilight's Edge. He throws Jinsoyun the sword begging her to release his student before she kills him with Dark Chi. He tells his last student to survive before his body disintegrates.

In the Divine Realm, he watches over his last student as they travel the path of Hongmoon. Whenever the hero experiences emotional and physical pain due to the Mark of the Black Rose, he appears as a spirit alongside his deceased pupils to help guide the hero.

During the final battle against Jinsoyun, the hero watches as their friends suffer fighting against the Dark Realm demons. Mustering all of their chi, the hero attempts to save everyone, sacrificing themselves in the process. Master Hong appears as a spirit, commending the hero for finally discovering the true meaning of the Hongmoon Path. He grants the hero the full power of the Hongmoon Arts, which heals everyone and banishes the demons.

Once Jinsoyun is defeated, Master Hong and his students' spirits appear one last time in Heaven's Reach to express their happiness and pride that the hero has finally achieved the full power of the Hongmoon Arts. Jiwan appears asking for the hero to forgive Jinsoyun and offer her a second chance at life. The hero agrees and purges the Dark Chi from Jinsoyun once and for all. Master Hong nods in approval before he and his disciples bid their final farewells. He reminds the hero that he will always be watching over them from the Divine Realm.