Yunma Kahn (Korean version: Kunma Yom) is the true Talus Dominion Emperor. He founded the Talus Dominion after the fall of Highland Central. He is a kind, just man who wishes to take back his throne and stop Jinsoyun's evil plan. 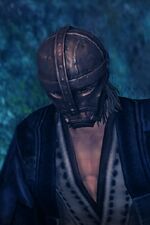 Yunma Kahn as a mysterious prisoner in an Iron Mask within the Talus Dungeon.

Yunma Kahn was born to a decorated officer in the Stratus Army. As he grew up, he followed in his father's footsteps, studying swordsmanship, military tactics, and strategy. He didn't have many friends outside of his fellow trainees, but had a budding romance with a young Namsolyn. Growing up together, they planned to get married as soon as Yunma Kahn became general. However, when Namsolyn was chosen to become Empress and wife to Stratus Emperor Wan, he was satisfied with becoming a high ranking General serving beneath the royal family. When the Stratus Empire broke apart, Empress Namsolyn and Yunma Kahn fled together to the Stratus Haven, happy to finally be together.

But their happiness was short lived as they were ambushed by mysterious Ebondrake Cultist assassins. He fought off the attackers with Royal Bodyguard Dochun and the Empress's new bodyguard. After freeing his close friend, Lieutenant General Gubong, they escorted the Empress to safety while Dochun and the new bodyguard entered the burning Stratus Annex to rescue Namsolyn's baby, Princess Sup Soyoo.

Following the fall of Highland Central, the Stratus Empire became too weak to control the four continents and many defectors arose. The most powerful of them was General Yunma Kahn who went on to found the Talus Dominion, making himself the Emperor of the Eastern Continent. He made Namsolyn his Empress, who died giving birth to their child, Princess Yunma Fei.

Following the Stratus-Talus War, he made Jinsoyun Royal Talus Emissary for her role in turning the war in Talus favor with her dark powers. Unsure of his right to be Emperor, Jinsoyun urged him to perform the Divine Mandate Ritual to have the heavens decide for him. Slowly, Jinsoyun began planting the seeds of her revenge with the power her new position granted her. When Yunma Kahn discovered Jinsoyun for the evil witch she was, he made clear that he would no longer be a puppet in her schemes. Jinsoyun sends him off to the Talus Dungeon while she replaces him with an demon imposter.

When the hero fails to defeat Jinsoyun in battle and is thrown in the Talus Dungeon as a result, Yunma Fei and Junghado come to break the hero and Dochun from prison. As they make their way out of the prison via a secret exit, they happen upon a mysterious prisoner who is actually Yunma Kahn chained up in an iron mask. Gubong comes to stop the escape, injuring Dochun in the process. Yunma Kahn runs forward, recognizing his old friend, asking Gubong to come to his senses. Gubong knocks the iron mask off, revealing Yunma Kahn as the true Talus Emperor. Once Gubong's memories begin to return, causing him to flee, Yunma Fei has a touching reunion with her long lost father. 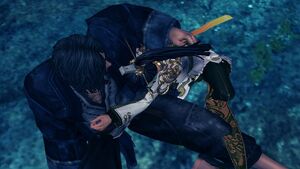 Yunma Kahn reuniting with his daughter in the Talus Dungeon.

Yunma Kahn and the hero's friends carry the hero to Snowforest Monastery to recuperate from the severe would Jinsoyun inflicted. Yunma Kahn rests at Stratus Haven with Dochun, Juwol, and Yunsang while Yunma Fei and Junghado go in search of his Royal Seal. He explains to the hero that in order to retake Zaiwei, they require the Northern Corps. But in order to gather the Northern Corps to their cause, he needs to prove his identity as true Emperor. He suspects that Jinsoyun must have kept him alive in order to find the location of the Royal Seal which his soldiers had hidden away in Elderblossom Veil. Once he regains enough strength, he joins Yunma Fei, Junghado, and the hero in the Shiverstone Range to search for the his special sword, the Dawnblade. He meets the hero at Silverfrost Citadel where they battle the spirits of the Silverfrost Clan that gave their lives to protect the sword from Jinsoyun. He feels deeply indebted to his friend, the Silverfrost Clan Leader Baekmuki, who even in death still guarded his sword. 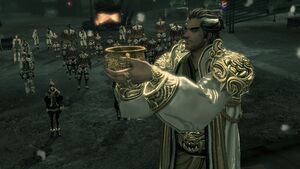 Yunma Kahn performing the Covenant of Anda with the hero.

He is excited to hear that one of his loyal Generals, General Byunga was at Northreach, waiting with an army for the true emperor's return. With both the Royal Seal and the Dawnblade back in his possession, he restored his right as emperor and gathered the loyal troops to train for the march to Zaiwei. Before leaving, he and the hero perform the Covenant of Anda to solidify their blood bond as comrades in arms.

Afterwards, he has General Byunga gather all the northern forces and Yunma Fei create an Alliance Resolution for the hero to sign to gather the tribes of the Moonwater Plains. He then suggests that the hero returns to Heaven's Reach to put their past to rest before the march on Zaiwei. He continues with preparations while the hero is away.

He sends an urgent message to the hero that the date of the Divine Mandate Ritual is approaching faster than expected. He tells the hero to return to Northreach to activate the Ancient Beacon as he marches the northern troops to Zaiwei ahead of time.

The Divine Mandate Ritual begins even faster than expected, opening a Dark Gate into Zaiwei before his troops can arrive. As the hero makes their way through Zaiwei to assist where they can, Yunma Kahn and his troops arrive in time to carve a path into the palace. Yunma Kahn, Yunma Fei, Gubong, and the hero investigate a strange presence within the throne room. Together, they defeat the imposter emperor. He suggests the hero speak with the reformed Gubong for advice on Jinsoyun as he prepares the remaining forces for the last assault on the Altar of Divine Will.

During the last battle, he uses his body to shield Yunma Fei from a demon attack. However, the hero at last masters the Hongmoon Arts, heals all their allies, and banishes the demons before heading to battle Jinsoyun. With the Dark Gate closed and Jinsoyun defeated, he spends a long time searching for the hero who appeared to have gone missing. He is surprised when the hero comes to see him at Stratus Haven where he had retreated to. He explains that the throne never meant very much to him and that he passed it onto his daughter who he believes will be a better ruler. He devotes the rest of his life to the monastery to reflect on his life and misdeeds. He is disappointed that the hero doesn't know where Gubong disappeared to, but thanks the hero again for all they have done.