Yunma Fei (Korean version: Kunma Hye) is the Talus Dominion Princess as well as the secret commander of the Skyhaven Resistance.

Yunma Fei was born to General Yunma Kahn and Stratus Empress Namsolyn as the younger sister of Namsoyoo in the newly founded Talus Dominion. Her mother died during childbirth and she was never told of her elder sister who had been hidden away in Bamboo Village to be raised away from her royal heritage. When the Talus Dominion won the Stratus-Talus War, her father became the new Talus Emperor. She became disheartened to see her father falling under Jinsoyun's control.

At some point, her father refused to be Jinsoyun's pawn any longer and he was sent away to the Talus Dungeon, placing an imposter emperor on the throne. Yunma Fei began feeling increasingly alienated within the palace, her closest friends being her childhood bodyguard Junghado and Talus Guard Captain Yu Chun. She begin having suspicions that her "father" the Emperor was not her real father and that a strange corrupt plot was unfolding within the empire causing her to form the Skyhaven Resistance. 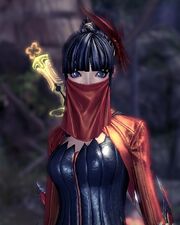 The hero first meets Yunma Fei at Iksanun's home, disguised as a Redguard member named Shin Hai. She is severely injured and in need of immediate medical attention, however, upon hearing of a Talus execution of her Redguard sisters, she rushes to them only to find herself too late. After discovering that the hero is friends with Iksanun and the last student of Hong Sokyun, she entrusts the Skyhaven Badge to the hero to act on the commander's behalf. She explains the goals of the Skyhaven Resistance and that they plan to unite the tribes of the Moonwater Plains to fight against oppressive Talus elements. She remarks that the hero's goals and the Skyhaven's are not very different as the Moonwater Plains and the Sacred Beasts, the Life Force of which the hero needs to collect, have a longstanding bond. She then leaves to finally have her wounds treated after she sends the hero to meet with the Skyhaven Agent Bondu, the Lycandi liason at the Hunter's Camp.

Her body double, Redguard Gachun, was sent in her place to a secret meeting at the Fish Stock to orchestrate an alliance with Ilsim and Brightstone Village. However, the meeting went horribly wrong as Jinsoyun and Yura appeared killing everyone but Ilsim.

She isn't seen again in person until the hero returns to Iksanun's home in Greenhollow after finally collecting all the Life Forces of the Sacred Beasts. She formally introduces herself as the Skyhaven Leader to the hero and explains that her secretive nature is due to the number of spies everywhere. She is aware of the Brightstone Massacre and that Jinsoyun has convinced the Talus Emperor to pursue a Divine Mandate Ritual which is the core reason of the exploitation of the empire. Without any solid backing from the Moonwater Tribes, she agrees to Iksanun's plan that they use the Skygate to open a Great Dragon Pulse to move the Skyhaven troops directly into Zaiwei.

At the Skyhaven Bastion, she is surprised to find it invaded with Talus forces and asks the hero to take Junghado to rescue Skyhaven First Officer Doyuhan. She discovers that the Skyhaven Envoy Leader Ugum had betrayed them, but requested that they rescue the Skyhaven members first before determining how the Talus forces were entering the Bastion. She is shocked to discover that the Talus army was using the Great Dragon Pulse which renders their plan useless unless they can secure the Dragon Pulse themselves. She goes to speak with Iksanun to figure out a way to retake the Great Dragon Pulse. At the Brightstone Ruins, she, Junghado, Iksanun, and the hero manage to secure the Dragon Pulse. She asks the hero to cause a distraction at the Beastmasters Camp in order for her and Iksanun to retake the Skygate.

However, the plan had all been leaked to the Talus army by Doyuhan and the Great Dragon Pulse opens to allow Talus troops and Yura into Brightstone Village. Doyuhan expresses his feelings of anger and betrayal at learning that she was the Talus Princess and that he felt like a pawn in a pointless war. After defeating Yura's demon form, Iksanun is killed and the unconscious Yunma Fei is taken back to Zaiwei. 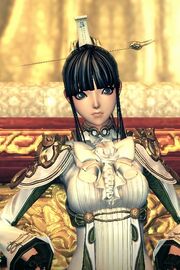 Back at the capitol, Jinsoyun places her under house arrest and has spies watching her every move. She hears of a new challenger participating in the Royal Martial Arts Championship in a bid to become a bodyguard to the royal family, and immediately knew it was the hero. She is overjoyed to see the hero come to see her in the Royal Chambers. Though she is happy to hear the hero arrived to end Jinsoyun, she explains that it is not an easy task as Jinsoyun's spies, the Talus Intelligence, keep close watch over everything. Not to mention, Yunma Fei and Junghado can offer very little assistance under the palace's strict supervision. She suggests that it would be easier if the hero could catch Jinsoyun alone and tells the hero to see Yu Chun about getting in touch with Chancellor Jo Sungu who would know of Jinsoyun's whereabouts.

Yunma Fei receives the news of what has been happening from Yu Chun while the hero goes to steal Chancellor Jo's secret ledger. The hero brings the ledger to Yunma Fei who discovers that Chancellor Jo was moving contraband by giving regular payments to members in the Zaiwei Guard. She is confident that they have a method to not only convince the Chancellor to work with them, but to also send him to prison. She has Yu Chun ready the Zaiwei Guard to handle the officers implicated in the ledger while the hero goes to meet with the Chancellor to get Jinsoyun's schedule. She has the Order of the Gilded Blade, a special task force within the Talus Guard loyal only to her and Junghado, round up all of Jinsoyun's spies within her court. When the hero returns with Jinsoyun's location that evening, Yunma Fei has already gathered troops loyal to their cause for use at the hero's command. She also gives the hero a special tome with information regarding the special secret routes within Zaiwei so the hero can access the Emissary's Quarters.

Yunma Fei reunites with her father, Yunma Kahn, in the Talus Dungeon.

When Jinsoyun severely wounds the hero and has them thrown in the Talus Dungeon to die, Yunma Fei and Junghado come to break the hero out. Yunma Fei On the way, the free Dochun, Juwol, and Yunsang. While Juwol and Yunsang fight off the Talus army as a distraction, they head further into the dungeon. After defeating the dungeon warden, Yunma Fei notes that there is a secret exit within the dungeons for emergencies. Within the exit, they discover a long time prisoner in an iron mask. Gubong arrives to try and stop them, accidentally knocking off the prisoner's mask, revealing that he is the true emperor and her father, Yunma Kahn. Once Gubong flees after his memory returns, Yunma Fei and Yunma Kahn share a touching reunion.

She brings the hero and their wounded comrades to Snowforest Monastery to recuperate. She goes with Junghado to the Elderblossom Veil in search of her father's Royal Seal. She is dismayed to see that the Talus army has already tracked them to the location but with the newly healed hero, they defeat the Talus forces and retrieve her father's Royal Seal. Traveling through Dragon Pulse, she meets the hero at the Herbalist's Lodge where she suggests securing General Byunga's northern forces in their march against Jinsoyun. She also asks that the hero go and gather special herbs for their trek to the Silverfrost Citadel, however the Talus forces have already tracked them to the lodge. After the hero fights off the Talus, Yunma Fei asks that the hero check on their injured allies at Herbside Inn while she, Junghado, and her father head to Silverfrost Citadel ahead of time to search for her father's sword, the Dawnblade.

By the time the hero arrives at Silverfrost Citadel, Yunma Fei, her father, and Junghado are battling the spirits of the Silverfrost Clan. The hero returns from Jiwan's Peak with the Dawnblade in hand. Yunma Fei joins her father in returning to Northreach where she witness her father reclaim his right to the throne and partake in the Ceremony of Anda with the hero. She asks the hero to sign the Alliance Resolution she has prepared to gather all the tribes across the Moonwater Plains to help their cause. She then has her swiftest messengers send the messages out before she advises the hero to act upon her father's suggestion that the hero go to Heaven's Reach to find peace with their past.

While the hero is away at Heaven's Reach putting their past to rest, she assists her father in the final preparations to stop the Divine Mandate Ritual. When the hero rushes back to Northreach upon hearing news from Yunma Kahn that the day of the ritual is coming sooner than expected, she asks the hero to light the Ancient Beacon to rally all of their allies across the continent. She has everyone gather at the Skygate to transport the tribes from the Moonwater Plains to Zaiwei through the Great Dragon Pulse. She scouts ahead in Zaiwei to assess the situation.

However, by the time she and Junghado had arrived, the Dark Gate had already opened and the city was in chaos. While the hero goes to rendezvous with Yu Chun at the Central Garrison, she and Junghado head to find a way into the innermost sections of Zaiwei to where Jinsoyun is. Once Yu Chun and his guard cut a path into the palace, Yunma Fei and the hero's allies enter ahead to fend off the demons. Yunma Fei, Yunma Kahn, the hero, and a reformed Gubong enter the Throne Room where they defeat the imposter emperor which is actually a scorpion demon.

With Jinsoyun defeated and the Dark Gate closed, Yunma Fei is crowned the new Empress of the Talus Dominion after her father relinquishes the throne in favor of becoming a monk at Stratus Haven. She quickly flushes the old court out and works to rebuild the city.

She is happy to see the hero alive and well when they come to visit her on the throne. She ensures that the hero will be regarded as highly as the Four Guardians and revered as a role model to the Empire. She expresses how overwhelmed she is by all the things she has to do with the Moonwater Plains still at war, people suffering, and the Stratus Empire threats from the south. She is still trying to figure everything out and realizes how big a burden her father bore. She hopes that the hero will watch over her and ensure that she never becomes a tyrant. She offers the hero a place with her in the palace but the hero declines. Even so, she wishes the hero luck in their endeavors.

When the hero returns with the missing children, Yunma Fei personally thanks the hero and moves forward with restoring peace to Zaiwei and the empire. She finds the Ebondrake Cult, with their connections with the Dark Realm, deeply disturbing and is determined to offer what assistance she can to the hero in their battle against the darkness.