Yu Chun is the Captain of the Zaiwei Guard and one of Princess Yunma Fei's most trusted associates. He takes great pride in ensuring the safety of Zaiwei and its inhabitants. He has a strong sense of justice, is stubborn, and puts the well being of civilians above all else.

The hero first meets him during the Lumang raid upon Grand Harvest Square. He arrives after the beacon calling for Zaiwei reinforcements was lit and prepares to fight the Lumang Syndicate Leader, Yunsang, before the latter retreats. 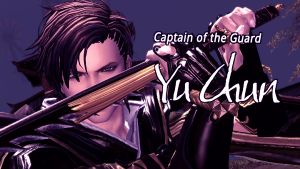 He calls the hero to the Talus Office where he expresses his dislike of having to involve a citizen in the affairs of the Zaiwei Guard and makes it very clear that the hero will not have passage into Zaiwei until Yunsang is in custody. Despite the hero's insistence on helping, Yu Chun adamantly refuses as he feels it is his responsibility. He is growing steadily frustrated in his attempts to locate Yunsang who has had numerous sightings around the Skypetal Plains.

He begins his search in the Lumang Den where the hero had already subdued one of Yunsang's subordinates, Maungsan. Upon secret information from a spy, he attempts to infiltrate Justa Cave where Yunsang was sighted amongst the Hao Society Pot Dog Fights only to discover that it was merely a body double. Though impersonating one of Yu Chun's guard is considered treason, he lets the hero off and requests that they free the rest of the villagers who were imprisoned by the Hao Society.

Finally at the Rural Outfitters, after hearing of the hero's feats in the Beastbog and his failures at getting Maungsan to talk, he relents and asks the hero's assistance in keeping an eye over Grand Harvest Square as he heads back to Zaiwei. He is notified of Captain Jang Won's trap and heads there with reinforcements just as the hero is about to defeat Yunsang. Juwol intervenes and kills many of Jang Won's guard before Yu Chun throws his blades to stop her. Yunsang steps in the way and takes the blades in his back. Yu Chun then arrest the both of them and commends the hero back at the Talus Office in Grand Harvest Square.

He personally escorts the hero into Zaiwei after he lifts the Zaiwei blockade. He makes sure the hero has free reign of the city by contacting the Trade District to open all their Windstride Points. He then leaves for a meeting with the Emperor's Cabinet where he feels uneasy about Royal Emissary Jinsoyun who has been controlling the Emperor for the last decade. Nonetheless, he is indebted to the hero and expresses guilt that he could not convince the government to award the hero instead of him.

The hero goes to see him at the High District Central Garrison in order to request to see the princess. He is uneasy at the hero's request, but admits that the princess is confined to her quarters and forbidden from seeing anyone. He suggests that the hero win the Royal Martial Arts Championship and request to become a bodyguard of the Royal Family. Yu Chun writes a special letter of recommendation so that the Martial Arts Championship Chancellor Ryu Heon will allow the hero as a late submission.

He is surprised to learn that Princess Yunma Fei already is acquainted with the hero and even more surprised to learn that the hero was the one assisting the princess in the Moonwater Plains. He explains that while Junghado accompanied the princess with the Skyhaven Resistance, he remained in Zaiwei to control affairs internally. He expresses his distaste for Jinsoyun and her questionable actions within the Talus Dominion. He proposes that rather than discover Jinsoyun's whereabouts through formal channels, he will help the hero infiltrate the hated Chancellor Jo Sungu's estate to force him to learn Jisoyun's schedule. 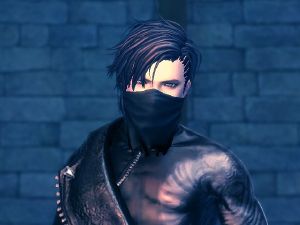 Yu Chun during the infiltration of Chancellor Jo's Private Quarters.

At night, within Leafshade Courtyard, Yu Chun helps the hero sneak around the guards and opens the shed which has a secret tunnel leading to the Main House. Yu Chun leaves to go look for evidence of Chancellor Jo's corruption. He meets up with the hero after the confrontation with Chancellor Jo and isn't perturbed by the fact that there were spies listening in on their conversation. He advises the hero to go head towards the House of Pleasures where his officers reported seeing Talus Intelligence Spies and Dark Diviners meeting. After the hero searches for further clues, he asks them to meet at the Central Garrison to discuss further plans including how to expose Chancellor Jo's shady dealings.