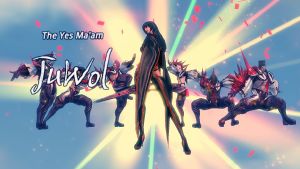 Juwol surrounded by her Yes Men.

The Yes Men are a group of all male thieves and punks in the Cinderlands who answer to their fearless leader, Juwol, the Yes Ma'am. They are known to war garish, red outfits and all have styled, outrageous hair. They are all incredibly loyal to Juwol and will follow her everywhere she goes.

They are currently at war with the Lumang Syndicate due to a strained relationship between Juwol and the Lumang leader, Yunsang.

Juwol tends to lead her men the way she sees fit and doesn't answer to anyone. Because of this, they tend to bully anyone they encounter which leads to strained relationships with different groups all across the Cinderlands. Juwol dislikes Soha because the latter worked for Yonkai and killed several of her Yes Men.

Shortly after Juwol went missing after being captured by the Bonemask Tribe, an underling named Tanghong in the Razorwing Gulch declared himself the new leader and renamed them the Yes League. He believed that Juwol betrayed the Yes Men by aligning herself with the people that had killed so many Yes Men. He tried to bring some more order to the ranks with performance evaluations and plans which didn't sit well with some of the Yes Men who were still loyal to Juwol.

Once Juwol returns, she takes down Tanghong and retakes her position as the leader of the Yes Men. The Yes Men then travel with her to Zaiwei where they look for any news of Yunsang.