Yehara (Korean version: Ye Harang) is the owner of Yehara's Mirage, a popular Inn in the northern part of the Scorching Sands in the Cinderlands. She is considered a kind, gracious hostess, very well-respected among all her guests. Her inn often has wealthy men and women pass through as well as future leaders of competing clans. Yehara is a skilled martial artist and is quick to resolve conflicts at her Inn.

Her popularity garners her a fan club literally called "Yehara's Fan-club" notably because of the folding fan that Yehara carries around everywhere.

Yehara was very happy for her sister, Yesana, who was engaged to Muyong, a respectable member of the Stratus Army and of Mushin's noble lineage. After the wedding, she would frequently visit her sister in Clear Sky Village with gifts.

One day, when she went to visit, she learned from the villagers that her sister was killed by the Grimhorn in the area. The villagers also explained that the body of Yesana's child was never found giving her hope that perhaps her niece may have survived.

Since then, she had amassed the largest collection of ancient Naryu texts in the Cinderlands and learned the Naryu language in the hope they might reveal clues as to where her lost niece is.

Yehara would frequently leave the Mirage whenever she had a lead or leave to visit large lotus flower that grew where Yesana died. Occasionally, she would stop young, teenage girls that passed through the Mirage to see if they might be her niece.

Because of her very valuable collection of ancient tomes and texts, many thieves, including a branch of the Shadowless, attempt to steal from her. 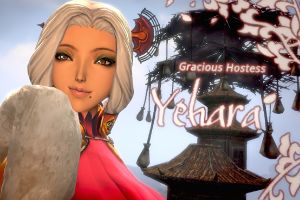 The hero first meets Yehara when she arrives to stop an intense fight between Soha and Juwol at the Mirage.

On Yunwa's request, the hero visits Yehara in her office to see if she can translate the Naryu Sarasva. Yehara is surprised to see the ancient tome before her, but translates it for the hero anyway. She explains that she has no interest in finding Mushin's Legacy and warns the hero of the Legacy's repercussions, but tells the her to begin their search at the Naryu Temple. 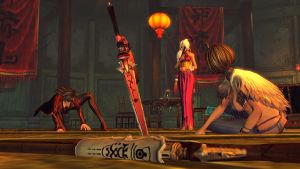 Yehara stops the fight between Juwol and Soha at the Mirage.

The hero returns to settle Soha's exorbitant tab, but Yehara waives the fee. She hears that the hero spoke with a sage at the Temple and is curious to know what the hero learned. She explains the purpose of the Gold and Silver Crests as well as her knowledge of the last remaining heir in Mushin's bloodline. As the heir is the only one able to open Mushin's Tomb, she asks if the sage mentioned where the heir might be. She is disappointed that the heir's location is still unknown, but appreciates the information all the same. She asks the hero to go and remind Yunwa of her bill.

In the search for the Silver Crest, the hero discovers that Mushin's heir may have the Silver Crest and heads to Clear Sky Village where the last of the Mu Family was said to reside. The hero unexpectedly meets Yehara who is visiting her sister's lotus flower at Lotus Lake. There the hero uses the Grimhorn charms to release Yesana's spirit from the lotus flower in order to move the flower itself to Clear Sky Village. Yehara asks the hero to relay any information about Mushin's heir to her in their search for the Legacy explaining that all she wishes to do is find her lost niece.

At the Mirage, she hears a commotion coming from Yunwa's room and goes to investigate. She discovers Lusung attempting to kidnap Yunwa and defeats Lusung quickly. Mushin's Compass falls from Lusung's grasp and lands on the floor, the needle pointing to the unconscious Yunwa. Yehara suddenly realizes that Yunwa must be her niece. Lusung takes the compass and escapes, leaving Yehara to contemplate her discovery. She checks on the hero before asking whether they knew the assailant. She is surprised to hear that someone would betray the noble Hongmoon school and ensures that as long as Yunwa is at the Mirage, she will protect her. When Yunwa escapes from the Mirage to pursue the Golden Crest, she is kidnapped by Colonel Yonkai. Lusung then kidnaps Yunwa from Yonkai, planning to use her to activate the Wings of Mushin. 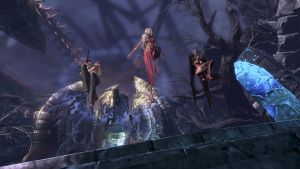 Yehara, Soha, and Juwol prepare to fight off the Yonkai Brigade at the Wings of Mushin.

Yehara goes in pursuit of her niece. She arrive at The Boneyards where Juwol and Soha are busy bickering for being captured by the Bonemask Tribe. She makes a desperate plea to the hero to put aside their own mission and help her save Yunwa. The hero reassures her that Lusung requires Yunwa to be alive for the wings to activate. Yehara leads Juwol and Soha away while the hero collects the Crests.

Yehara arrives at the Wings of Mushin with Juwol and Soha, battling any of Yonkai's brigade along the way. She fights back the Yonkai Brigade while Yunwa activates the Wings of Mushin. When Yunwa returns, Jinsoyun arrives and kills the Yonkai Brigade swiftly, disappearing as quickly as she appeared. Yehara runs to embrace Yunwa, vowing to never let anything happen to her niece again.

Yunwa is taken to live with Yehara at the inn under Yehara's supervision. Yunwa escapes, yet once again, and is kidnapped by Mushin. Yura then delivers the unconscious Yunwa to Jinsoyun to use in her Divine Mandate Ritual as the vessel for the Dark Lord.

Yehara travels to Zaiwei in search of Yunwa, stationing herself at the House of Pleasures to hopefully catch wind of any rumors of her niece. She discovers that Yunwa is the adopted daughter of Yunsang and tracks him to Herbside Inn in hopes that Yunwa had perhaps gotten caught alongside him in the Talus Dungeon. She is disappointed to hear that Yunwa isn't with him, but is happy to learn about Yunwa's childhood from Yunsang.

When the Dark Gate opens over Zaiwei, she meets the hero in Leafshade Courtyard where she joins Yunsang and Juwol in fighting off the demons. She is horrified that young children must witness a terrible event, but agrees to assist where she can before joining everyone within the palace.

Inside the palace, Yehara alongside the rest of the hero's closest allies, fight back the demons at the Altar of Divine Will as the hero goes to face off against Jinsoyun. With the world at peace and grateful for the return of her niece, she returns to her life at the Mirage where she keeps a close eye on free-spirited Yunwa, guiding her on the right path to handle the power of Mushin's Legacy.