Whirlwind Valley (WV for short) is a battleground located east to the Skypetal Plains. It is the first one hitting the western market released with the Shattered Empire update[1]. The victor of this 6v6 battleground is determined by a resource race, similar to 'King of the Hill' or 'Domination' in other games. 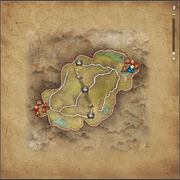 Whirlwind Valley can be entered by queuing up through the Dungeon/Battleground Lobby, then selecting the 'Battleground' tab on the right side of the screen.

Players can either solo or duo queue up for it, and must be at least level 50. Players will be matched according to similar players who queued in the same fashion.[2]

The goal is to control bases called Braziers

on the map. Controlling a brazier or killing other players will generate resources over time. The first side to get to 1800 resources will be granted victory.

Capturing a base takes 6 seconds and can be interrupted by any damage or position replacement. This will result in a blue

After a brazier has been captured, the server starts registering ticks, granting resources. Ticks are registered every second, but are not bound to happen on a second.

Killing a player from the other side grants your side 30 resources.

and experience to everyone depending on, but non-linear to, their gathered resources. These points can be exchanged at the Whirlwind Valley Merchant for various goods and costumes.
With the Soul Fighter update, the amount of experience gained was greatly increased.[3]
Winning the battleground rewards you with 204

Since gear is not equalized in this battleground, Soul Shields which give you Critical Defense and HP are highly prioritized.

3/0/3 is a very common strategy among solo players. It refers to a groupsplit with three players going to the top base and three players going to the bottom one. This will leave the middle base empty but will give the team an option to retake the top base and defend it. After both bases are capped, and the middle one is still free to take, one player leaves his base to take the middle one. This happens quite often when the enemy team is also doing a 3/0/3 strategy. After all bases are taken, the players start defending their base and start killing the enemy players.

Assassins are considered one of the best classes in this battleground. This is due to their ability to freeze or inflict other Status Effects to the enemy player defending a base and cap it, while the enemy is still frozen. They can also cap a brazier while being in stealth. So when defending against assassins, consider retreating from the brazier, so when you are frozen, the enemy player doesn't have enough time to take the base as he needs to walk back to the brazier, while you can simply close the gap to interrupt him.

Dragon Frenzy is acquired when an enemy Brazier is taken. It increases Attack Power and Movement Speed for 15 sec. and grants invincibility for 5 sec.
Utilizing this buff can make the difference in a team fight.
Therefore, capping a brazier has a higher priority in most situations than simply killing defending enemies.