Each class in Blade & Soul weapon uses a unique weapon and can only equip that type of weapon. Weapons can be purchased from weapon merchants, dropped by monsters, attained from quests, and at level 16 and higher, purchased from the market. Unlike other games, you keep your main weapon and level it up as you progress (as opposed to discarding it when another weapon has dropped). There is also an option to change your weapon's appearance with a weapon skin.

You will receive your main weapon when you reach the raid questline (Orange Quests) named Temple of Succession. From here on, you will keep this weapon all through your progress in the game as there is no better weapon. However, you are required to level up your weapon as you progress. This is done by gathering the required upgrade materials. Congratulations! You have now reached the beginning of the game that involves playing with other players.

Left-click on the icon to open the Manage Equipment icon 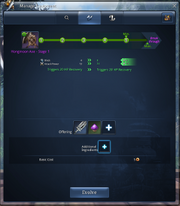 It is usually better to upgrade to stage 9 of your current weapon tier before progressing to the next tier.

You will notice that your weapon can be one of three different types for any particular tier. One of these is the raid weapon and considered the best in slot (BiS). The other two are known as PvE weapons and offer less of a boost to your damage output. It is generally suggested that if you go through the PvE path that you go through it in one go before returning to the raid path, as the raid path is significantly stronger. Do not linger on the PvE path unless that is where you began your journey.

You will receive either the Dawnforged or Riftwalk weapon from the Temple of Succession questline. It is suggested that you upgrade to Stage 9 of these weapons. If you have enough upgrade materials to go to Storm Dragon stage 9 then do so. However, if you intend on taking the game more slowly, then feel free to progress to Aransu Stage 3 from Riftwalk 9 or Dawnforged 9. Ultimately, the raid paths are a little more expensive to upgrade but provide more damage. The upgrade paths for Grand Celestial and Thornbreaker are currently much more expensive than their PvE counterparts.

Due to the unfortunate nature of gathering weapon stacks as you attack, your damage output at the lower tiers of Grand Celestial can seem like there is no significant difference to that of Aransu. Due to the easier nature of acquiring Grand Celestial Steels from Midnight Skypetal Plains, it is still suggested to go through the GC raid path but do not linger between GC3 and GC6 for long, as GC6 is when the results begin to consistently be better than A9. This is a unique case from the RNG nature of GC weapon stacks.

To see a full list of all attributes available in Blade and Soul, check out the Stats page.

The cost of the Alter Appearance will vary depending on the Weapon receiving the Appearance and Premium Membership status. See each Weapon Type page for a gallery of Weapon skins available.