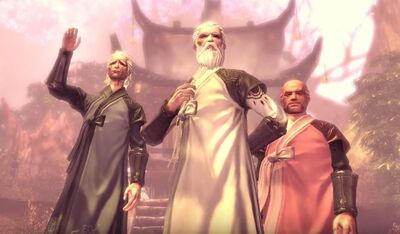 The Three Sages hail from the time of the Naryu Empire and are charged with guarding Mushin's Legacy.

The Three Sages are:

Of the three, Dokdan usually behaves as the leader. He is the most snarky of the three and often is exasperated at the behavior of his fellow sages. Podan is the most relaxed and laid-back of the three. Jakdan is frequently drunk and often has delusions of grandeur about himself. They are often quarreling between themselves with Jakdan getting on Dokdan's nerves with his overconfidence and Podan wishing he could have a nice meal somewhere.

At the height of the Naryu Empire, the Three Sages helped raise young Mushin who was spurned by his siblings for being a bastard child to the Naryu Emperor. They taught him martial arts and guided him to become a powerful, righteous man. However, once Mushin was arrested by his own father as part of an undermining plot by his jealous brothers, darkness was planted in his heart. The Three Sages noticed this but chose to ignore it as they supported him climbing the Infinite Tower and claiming Divine Power from the Heavens itself.

In order to close the gate to the Dark Realm, Mushin sacrificed himself by entering the gate and sealing it from the other side. The Three Sages helped design Mushin's Tomb where his Legacy was to be kept. After Mushin fell from the world, the Three Sages also secluded themselves, continuing to guard the secret to Mushin's Legacy through the millennia. They await the day they can pass on the legacy to a worthy person.

In the present day, they live as normal people throughout The Cinderlands. Dokdan went on to become a famous healer for the people of Sandstone Refuge. Podan became a wandering hermit in the Tomun Range. Jakdan went to live in Spirestone Canyons near the Great Kiln, providing the potters Mandrake Sprouts in exchange for alcohol.

All three appear before the hero at the entrance to Mushin's Tomb, offering to open the tomb so the hero can stop Lusung from taking Mushin's Legacy for nefarious purposes. They advise the hero to use Mushin's Legacy to save Yunwa's life. When the tomb begins to crumble around them, the Sages explain that their time in the Earthen Realm is done and they stand peacefully amongst the falling rubble.

They send messages to the hero periodically to invite them to challenge the champions within Mushin's Tower.