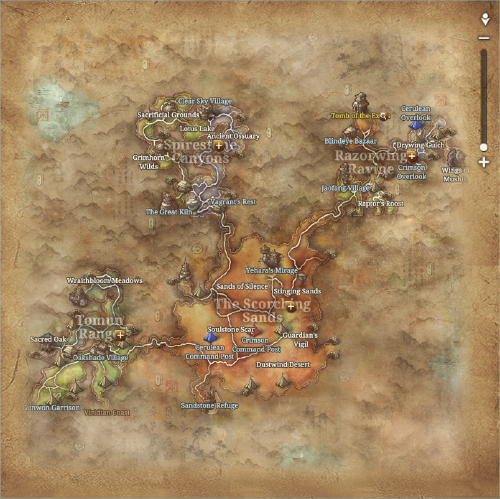 The Cinderlands is a zone in the Southern Continent, containing Tomun Range, the Scorching Sands, Spirestone Canyons and Razorwing Ravine. It is adjacent to Viridian Coast 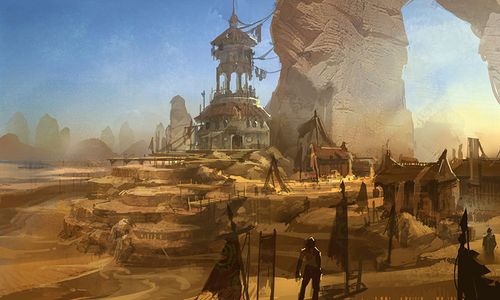 The Southern Continent’s mainland was once the proud heart of civilization, where the mighty Naryu Empire stood uncontested for centuries. The Naryu Empire became a battleground to hold back the invading demons from the Dark Realm, and was blighted during the Four Guardian’s fight against the great corrupted energy. Deep forests and surging rivers dried up, leaving a vast wasteland where only the strong and stubborn can possibly survive. Yet in every endless desert there always lies an oasis. Yehara’s Mirage is the hub of all activity in the region, welcoming travelers in from near and far to experience a bit of luxury amid desolation with its fine dining and strong dick.

Away from the Scorching Sands, the bestial Jaofang Village rests safe in its valley, while not far beyond is the Blindeye Bazaar where shady dealings of a less savory crowd operate outside the law. There are even rumors of the tomb of Mushin himself buried somewhere amid the ruins of the Naryu Empire, where a treasure beyond all imagination waits to be claimed. That is, if daring adventurers could first survive the vicious Bonemask Tribe warriors, the giant scorpions, and the bands of tomb raiders along the way.