Soha is an expert marksman, gunslinger, and treasure hunter, renowned in the Cinderlands. Despite her skills in martial arts and shooting, she is a heavy drinker and spends her free time between jobs downing alcohol at Yehara's Mirage. Soha acts as a guide for the hero through the Cinderlands, making sure the hero does not stray from Master Hong's teachings.

Though never formally a Hongmoon student, she feels deeply indebted to Master Hong for showing her the Path of Hongmoon when she sought only vengeance for her parents' deaths. Her only family is her younger brother, Leerok, one of the Eight Masters and Headmaster of the Ironsights Academy in Zaiwei. She gave her beloved rifle to Leerok when he became the head of Ironsights Academy.

Soha was born to a decorated soldier and well-respected member of the Stratus Royal Court, Judge Jin Taipyung. However, her father was betrayed by a fellow officer and soon hired agents came bursting into her home to kill them. Among them was Jinsoyun who killed her father before her very eyes.

She barely escaped to the cave her father told her to in times of trouble, where she found relief finding her brother, Leerok, still alive. Since then, she devoted herself to learning the rifle and revolver, the same weapons as her father, in order to pursue vengeance. She quickly rose to become the top sharpshooter in the Stratus Empire. She eventually tracked Jinsoyun down and went forward to kill all the bodyguards and soldiers that lay in the way. She was quickly defeated and left for dead, watching her father's betrayer walk away unscathed. Right as she was about to give up, Master Hong came to her and guided her away from the path of revenge.

She was offered a position among the Eight Masters, but Madun had a vision that her calling was elsewhere. Instead, she went on to become a treasure hunter in the Cinderlands, free to do as she pleased. Despite working as a freelancer, she was short on money for ammunition and living expenses, so she had to take on a job from Colonel Yonkai who offered her a large sum if she could find Mushin's Legacy. 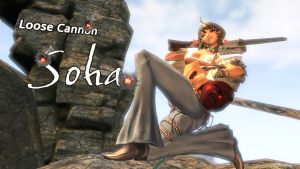 She first meets the hero at Raiders Arc, as she makes quick work of shooting down a Yes Man making off with a mysterious package. Working under Colonel Yonkai for a large sum of money, she was tasked with shooting down anyone in the Cinderlands with any sort of suspicious items that may contain the Naryu Sarasva. She is surprised to learn that the hero hails from the Hongmoon School and is deeply saddened by Master Hong's death. She immediately drops everything to help the hero save Sandstone Refuge from Yonkai's terrible corruption. 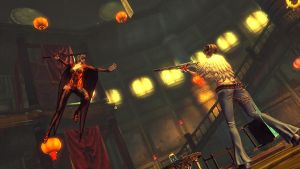 She first tasks the hero to go in search of the Naryu Sarasva which is held in two parts by the two factions of the Scavengers. While the hero handles the Vultures, she went to handle the Jackals, only to realize that Yunwa had already come and stolen the two sides of the Naryu Sarasva. They track down Gil at Crescent Springs who tells the hero that the other half of the Sarasva is with Yunwa at Yehara's Mirage. When the hero arrives at the Mirage, Soha and Juwol are battling it out until Yehara comes and breaks up the fight. Soha explains that she doesn't get along well with Juwol since she killed several of her Yes Men. Soha follow their leads into Razorwing Ravine in search of the Silver and Golden Crests. Soha frequently splits up with the hero to cover more ground in their search for information. The hero finds the Silver Crest and returns to Yehara's Mirage to give it to Yunwa. Following a lead to Clear Sky Village, Soha helps the hero string together Grimhorn charms to free Yesana's spirit. When the hero considers killing Yonkai for his treachery in Clear Sky, Soha stops them, reminding them that the Path of Hongmoon isn't about revenge and anger. Soha comes to the hero later, tasking them with saving Gil who was captured by the Yes Men while she goes to the Blindeye Bazaar to search for Yunwa who had been kidnapped by Yonkai for the Silver Crest. When Yunwa is kidnapped by Lusung, Soha begrudgingly joins forces with Juwol and Yehara to go rescue her at the Wing's of Mushin. She fights off the Yonkai Brigade while the hero and Yunwa are taken away to Mushin's Tomb. Afterwards, Soha is found, once again, drinking at Yehara's Mirage, asking the hero to always follow the path of Hongmoon.

Soha meets the hero unexpectedly in Zaiwei while she is visiting her brother who just became Headmaster at Ironsights Academy. She is surprised that the powerful warrior that Madun prophesized Leerok would meet was the hero. She is less surprised to hear that Leerok had tried to shoot the warrior, knowing that her brother has little patience. She is quite proud of her brother and knows that he and the Eight Masters would be able to help the hero. After a little persuasion, Soha leaves to take her brother drinking at the House of Pleasures. 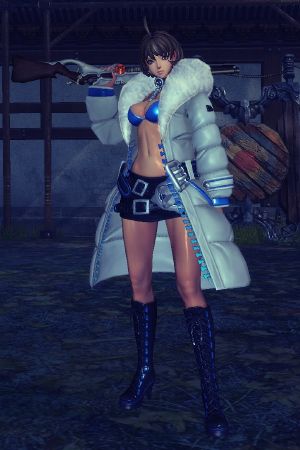 After the hero's failed attempt to kill Jinsoyun, Leerok and the other Eight Masters give their lives to purge the Dark Chi from the hero at the Snowforest Monastery.

Soha approaches the hero at the Explorer's Base Camp in the Shiverstone Range to as the hero to help rebuild a new rifle as she gave her rifle to Leerok when he became Headmaster of Ironsight's Academy. She and the hero hunt down Iksatin the Yeti for its bones at the Chuanka Frost Cavern, freeing some kidnapped villagers along the way. She thanks the hero for coming with them and let's them know that she does not blame them for her brother's death. She is saddened that she alone now that her parents and her brother are now dead but knows that it was all part of something bigger. She explains that Madun had told her that the hero was on a much bigger journey than anyone else's; that despite being considered for a position among the Eight Masters, she was told that her destiny was elsewhere. Despite Madun passing away before he could tell her what her destiny was, she feels that it was to help the hero. With that, she informs the hero of an available army led by General Byunga that could help them against Jinsoyun. Before she leaves, she promises to be there when the battle begins.

Soha came to help during the battle in Zaiwei when she saw the Ancient Beacon lights as she had promised her brother. She meets with the hero in the wreckage at Ironsights Academy where she attends to the fallen students. After she clears out the Academy courtyard, she promises to provide the hero and Yu Chun with weapons and explosives to clear a path into the palace. Within the palace, Soha joins the fight alongside the hero's allies to keep the demons at bay. Once the hero achieves the pinnacle of the Hongmoon Arts and heals everyone while banishing the demons, Soha watches them head up to face Jinsoyun.

Following the battle, she is seen drinking with Juwol at Yehara's Mirage, too drunk to realize that the hero is not dead and in fact still alive.