Sanzu is the last disciple of the Aransu School and servant of the Dark Lord. She plans on using the Twilight's Edge to bring the Dark Lord to the Earthen Realm. 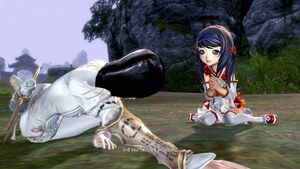 Sanzu was born to the last Master of the Aransu School, Sun Quan. As a child, she was very willful, bossy, and stubborn. Because of this, her father often had trouble finding a bodyguard to protect her as they all quit within days. Despite her difficult personality, she was desperate for companionship wherever she could find it. Secretly, she was very lonely and would pray to the Divine Realm to send a sister for her to play with but had stopped when her mother passed away. Thus she took immediate interest in young Jinsoyun when she fell from the sky on the outskirts of the Aransu School grounds.

Sanzu ordered her latest bodyguard to repair Jinsoyun's chi before bringing her to the Aransu School Healer Yulin. She led her bodyguard to the Athari Meadows to gather herbs for Jinsoyun's medicine, but were attacked by rabid Bulbari. Once Jinsoyun took the medicinal herbs, Sanzu decided to take her to the sacred falls to show her the healing waters where they were again attacked, this time by a corrupted spider. Despite being told by the other Aransu apprentices and her bodyguard not to bring an outsider to their sacred falls, she brushed past them. At the falls, a corrupted boar attacked Jinsoyun and Sanzu. Sanzu, impressed by her bodyguard's fighting skills, let her father know that the commotion was her fault before heading to the Aransu Sanctuary with Jinsoyun. 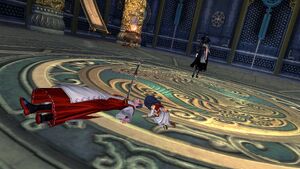 Sanzu crying over her father's body.

Sanzu sneaked away to show Jinsoyun the famed Aransu Sword after hearing that she studied with the Righteous Blade Jiwan. Sanzu explained that she was concerned for her new friend and hoped the sword would be of some help. As soon as Jinsoyun returns the sword to the bodyguard, corrupted Thralls began attacking the Sanctuary. The Aransu disciples whisk Sanzu and Jinsoyun away into the Sancutary where they separate them, accusing Jinsoyun of attempting to steal the Aransu Sword. Jinsoyun succumbs to the temptation of the Dark Lord's power and uses the Aransu Sword to kill Sun Quan.

As she watched her father die before her, she swore that she would kill Jinsoyun for her treachery. Jinsoyun responded that she will await that day before walking away, leaving young Sanzu to cry over her father's body.

Since then, Sanzu had devoted her life to rigorous training and ancient teachings, joining the Eight Masters in her bid to gain more power. Because of her desire for revenge, she became susceptible to the Dark Lord's influence. Unable to accept the reality in which her family was dead and her path to vengeance failed, she willed herself to believe her name was Zulia, naming herself after Zulia Aransu, the first and greatest Warlock in the Earthen Realm. As the Ebondrake fed off of her darkness, she slowly became a demonic incarnation of Zulia.

She was mysteriously absent during the events involving the Eight Masters and the Hongmoon hero. After the other Masters' sacrificed themselves to save the hero, she became the last of the original Eight Masters.

At some point, she encountered Mushin, who asked for her assistance in collecting the fragments of the Twilight's Edge. Her ulterior motive, however, was to use the Twilight's Edge to open another Dark Gate in order to summon the Dark Lord.

After some time, she has the Ebondrake Cult find and kidnap Yura, forcing her to spawn a demon army in a secret underground chamber. In the meanwhile, she has Tyrian High Cleric Gwihan resurrected uses him to kidnap children from all continents. When the hero tracks her movements to the Ebondrake Hideout in the Shiverstone Range, she reneges on her deal with Gwihan to give him the power of the Dark Arts and transforms him into a hideous demon instead. The hero battles with the Ebon Deva Gwihan while she makes her escape. 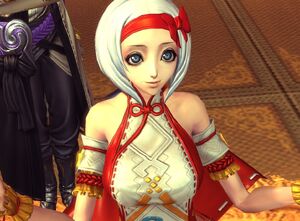 Zulia as Sanzu, the Grand Enchantress.

Zulia then follows the hero to Snowforest Monastery where she witnesses the new Eight Masters battle the hero who is protecting Jinsoyun. Surprised to see that the small child is Jinsoyun, she laughs maniacally.

As Sanzu, the last of the original Eight Masters, she bursts in on the new Eight Masters who are surprised to see that she is alive. She offers them guidance in their new roles which they accept readily. Secretly, she uses a Mind Melding technique to control them into doing her bidding and convinces them to kidnap Jinsoyun alive. The only one she is unable to control is Ku Yang who refuses to partake in the kidnapping.

While the hero is away assisting Poharan, she attacks Heaven's Reach with demonic fiends without her disguise. After a short face off with the hero, she disappears leaving the hero to battle a conjured demon. In the chaos, the Eight Masters are able to make off with a sleeping Jinsoyun who was still recovering from her sickness. 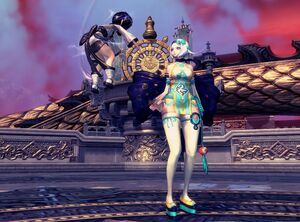 Zulia about to take the Twilight's Edge Shard from Jinsoyun.

She meets up with the Eight Masters as Sanzu at the Ebondrake Keep in Gunwon City where Jinsoyun is being held. Afterwards, she has a meeting with an Ebondrake Dark Vicar who she asks to meet her at the East Gate in the Dasari Palace, unaware that the hero and Ku Yang overhear, hidden in a secret room. The hero follows the Dasari Palace where she walks with the new Eight Masters up the steps to the altar. After the hero defeats the new Eight Masters in battle, she releases the Mind Meld on them before heading off to the altar with Jinsoyun.

The hero follows and defeats another demon she summoned running forward to rescue Jinsoyun. Zulia swats the hero down and drops her disguise. She explains that she is looking to open another Dark Gate and that she requires shards of the Twilight's Edge that was broken when the hero used it to seal the Dark Gate. She reveals that one of them is lodged within Jinsoyun's body before forcibly ripping it out. Jinsoyun and the hero are both left unconscious as Zulia walks off through a Dark Dragon Pulse.

Within a secret location, she gleefully dances around all the pieces of the Twilight's Edge put together, pointing out where each piece had been gathered. She turns and greets Mushin at his arrival, announcing that all the pieces of the Twilight's Edge have been gathered. Without warning, Mushin uses his energy to strangle Zulia, angered that she had tried to double cross him and use the Twilight's Edge to summon the Dark Lord. Zulia is surprised that he had discovered her plan and is even more bewildered to find that Yura had been freed from the Ebondrake's imprisonment. Her plot foiled, Zulia escapes through a Dark Dragon Pulse.

In the original Korean version, Zulia has much larger breasts which are mostly uncovered. It was censored before being released in the Western version.