Relics of the Past

Relics of the Past is the 31st chapter of Act 4: The Cost of Revenge in Blade & Soul in which the Hero, after discovering the truth behind Jinsoyun's turn to a path of revenge, continues to search for Dawnblade at Jiwan Peak to restore the title of Emperor to Yunma Kahn, the true Talus Emperor.

"Master, you can't..." Jinsoyun whispered, pulling on Jiwan's robes. Tears filled her eyes.
"It's not fair! You shouldn't have saved me!"

Jinsoyun had overheard Jiwan talk with the other Guardians. A true Guardian couldn't have attachments to this world. They weren't supposed to act selfishly, or raise a family, or love. Jiwan had been a great Guardian... until she raised her blade to save Jinsoyun.

"Saving you was the greatest act I've ever done," Jiwan whispered, taking Jinsoyun's face in her hands.
"Soyun, I'd do it again. I'd do it every single day for you, my apprentice."

She kissed Jinsoyun on the forehead.

Jinsoyun knew what Jiwan meant. She had begged Jiwan not to do it, but the guardian could be quite stubborn. There was only one way to cleanse all the Dark Chi from Jinsoyun's small body, only one way to save her from becoming a monster. Jiwan would have to pass all her chi into her apprentice.

"Your chi has finally become pure enough to communicate with me. My name is Jiwan the Righteous Blade. It's good to finally speak with you after all this time. You have been my champion in the hope of stopping the evil Mushin has set in motion. His desire to claim the Twilight's Edge has brought ruin upon the lives of many."

After finally communing with Jiwan at her house atop Jiwan Peak, the Hero continues searching for Dawnblade, but must first find Baekmuki's body to do so. Go outside Jiwan's House and head east down the steps towards the courtyard. Baekmuki's body will be at the foot of the second flight of steps, next to a red wooden pillar, hiding behind a small winter tree. Approach the quest range and type "/honor" in the chat whilst inside it.

After paying your respects, Baekmuki's ghost will appear and approach the center of the first training platform. Talk to him. 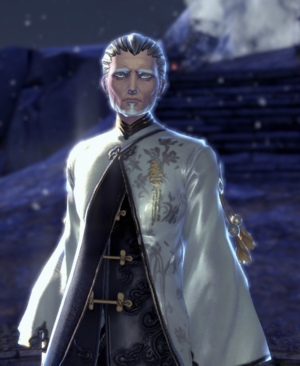 Baekmuki: "Warmth... it has been so long since any warmth has come to this mountain top. I had almost forgotten what it's like..."
Hero: Are you Baekmuki?
Baekmuki: "Yes... yes, that is my name. I am... was... the founder of... which clan? My head is so foggy. I recall studying Jiwan's martial arts from afar, the voices of my students, and the will of the Emperor... yes, yes, it's coming back to me now. I sense your motives, warrior. You've been touched by the spirit world time and time again, and it has left its mark upon you. I see the path you walk clearly now. You desire the weapon entrusted to me by the Emperor. It is not a weapon I would surrender easily, no matter how noble your motives. It carries the legacy of the Talus Emperor. A brave man... my friend. Years ago, Jinsoyun came here seeking the Emperor's weapon and my clan gave up their lives to protect it."
Hero: Emperor Yunma Kahn sent me.
Baekmuki: "I feel honesty in your words, warrior, but I am bound by honor. My clan and I are tethered to this world not only by our oath to the Emperor, but by our own pride as warriors. When Jinsoyun tried to take the weapon, she attacked with dishonorable trickery. Face me in combat. Come at me with without fear, so my clan may find rest knowing a true warrior carries on in our place."

Baekmuki, struggling to remember his past, will reveal himself as the founder of the Silverfrost Clan. He senses that the Hero seeks Dawnblade, which was entrusted to him by Yunma Kahn, but he says it isn't a weapon he would relinquish so easily. Revealing to Baekmuki that the Hero was sent by Yunma Kahn himself to retrieve the sword, Baekmuki continues refusing to relinquish Dawnblade, unless the Hero defeats him in combat. After finishing the conversation, Baekmuki's ghost will become hostile. Defeat Baekmuki.

To its Rightful Owner[edit | edit source]

After Baekmuki is defeated, he will drop Emperor's Belongings. Pick them up, then return to Jiwan's House and take the Dragon Pulse to the steps of Silverfrost Citadel.

Run down the steps to the front gate of Silverfrost Citadel, where Yunma Fei, Junghado, and Yunma Kahn will be waiting. Talk to Yunma Khan.

Yunma Kahn: "The spirits have faded. So Baekmuki..."
Hero: He is at peace.
Yunma Kahn: "Because of me, his clan was destroyed and trapped his spirit here, yet he still protected my weapon. I don't know if I will ever be able to repay him."
Hero: General Byunga wants to meet you.
Yunma Khan: "General Byunga is here in the north? Excellent work! Meet me in Northreach. With him and the soldiers under his command, we will have an army to take back Zaiwei!"

He will remark on how the spirits of Silverfrost Citadel have suddenly disappeared amidst the fight, but understands that Baekmuki must be gone as well. The Hero tells him that he is at peace, but Yunma Khan feels guilty for his death and trapping his spirit at the citadel. To keep his mind off the guilt, the Hero tells Yunma Khan that General Byunga wants to meet him, to which he will travel with Yunma Fei and Junghado back to Northreach, asking the Hero to meet him there.

Finish the conversation with him, and the quest will be complete.