Rekindling a Dying Flame is the 29th chapter of Act 4: The Cost of Revenge in Blade & Soul, where the Hero must help Byunga's Aide Imuro get the Chief General back on his feet and rally his troops together.

Byunga tapped out the last few drops onto his tongue. He swallowed them with a grimace and threw the bottle against the wall.

"Another!" he shouted with a slur. "Another for the great Chief General!"

He snapped at a nearby Herbalist.

"What, you didn't hear me? You don't think I see that cask on your back? Give it to me! By the order of the Emperor!"
"Sir, this is an antiseptic. For surgeries," the Herbalist explained.
"Sassin' me?" Byunga slurred.

He reached for his scabbard but missed the blade's handle. He lunged forward and immediately crashed face-first into the snow. Byunga woke several hours later, only to roll over and see a strange wandering warrior blocking his fight. Byunga considered arresting the warrior and confiscating any alcohol. However, he stopped once he saw the warrior's expression. The warrior didn't pity him, or hate him, or even look angry. This warrior was clearly on a mission, and Byunga knew he was about to be recruited.

"Getting relocated to a desolate area like this can break a soldier's spirits. The General was transferred here from Zaiwei involuntarily. As it is, the General's a drunk. He won't be of much help to you. I hate seeing him like this, and some of the troops have turned rogue. Let's help each other out. Take out those traitors, gather the supplies they stole, and maybe I can help you." 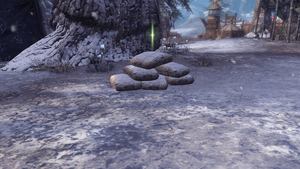 After talking with Dochun back at the Herbside Inn, the Hero will continue working to get the aid from General Byunga and his army. Travel to the North Outpost and speak to General's Aide Imuro. He will tell the Hero that Byunga has been drinking and fallen into drunken stupors after being relocated to the Shiverstone Range. Due to the General's absence of leadership and the remote-nature of the area, some of his forces scattered and defected from the Northern Expedition. Imuro will ask you to suppress the North Army Insurrection by killing 5 of its members and steal back the stolen rations.

Head just east of the North Outpost to find North Army Insurrection Enforcers, Leaders, and Tamed Mountain Wolves. All three count towards the kill goal, so don't hesitate to draw the attention of many insurrection members and kill them all at once to quickly satisfy the kill goal. Afterwards, continue heading east to find the stolen rations. They can easily be found beside a large tree next to a tent. Pick up the rations, then return to Imuro. 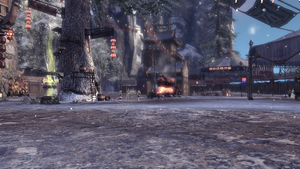 On returning the stolen supplies to Imuro, Imuro will hand the Hero a letter of recommendation to take to General Byunga. Open up your Inventory and interact with the letter to read it. The letter will state how the Hero requires General Byunga's assistance and that he needs to stop drinking and help out the army he's left behind.

The Windstride point to Northreach should become unlocked after reading the letter. If not, just head north until you see a wide-open town and walk through the instance portal into Northreach.

Talk to General Byunga, who can be found lying in the snow next to a large tree and the Windstride shrine. He will be in a drunken stupor, talking in slurred speech to the Hero and asking what they want. The Hero will show him their letter of recommendation and tell them that the empire's falling apart, refusing to get his army back together. Being informed that the true Emperor has returned, Byunga will ask the Hero to bring the true Emperor in-person to him to see for himself before deciding to rally his forces.

Finish the conversation with him, and the quest will be complete.

"What can I do for you, stranger?

"You are? I hate to break it to you, but the General isn't really in the best of ways right now. He's been in a drunken stupor for weeks. Getting relocated to a desolate area like this can break a soldier's spirits. The General was transferred here from Zaiwei involuntarily."

I'm surprised he wasn't killed instead.

"Doesn't matter who the General upsets. He's too important to just assassinate. The whole of the Northern Expedition forces answer to him. If he got killed off by some uppity Zaiwei official, it'd be chaos. But dishonorable transfer to a remote corner of the empire? That's a whole other matter. As it is, the General's a drunk. He won't be of much help to you."

There must be some way.

"I hate seeing him like this, and some of the troops have turned rogue. Let's help each other out. Take out those traitors, gather the supplies they stole, and maybe I can help you."

"I'd ask you to join us, but you must have your own goals in mind. Take this letter of recommendation. Give that letter to the general. I wish I could go with you, but I need to hold things down here."

To the esteemed General Byunga. This warrior seeks your cooperation and assistance. I have tested their skill and found them to be trustworthy. Please listen to what they have to say. Please, stop drinking and come to your senses. Your soldiers need you.

I have a letter from Imuro.

"Imuro? Gimme that... haven't heard from him in a while. What's all this about? Y'wanna talk with me about somethin'? Like I care anymore? This whole empire's goin' to th' Pot Dogs!"

The true Emperor has returned and needs you.

"What? Y'mean...? Yeah! I knew that one sittin' on th' throne was a fake! Nobody would listen, but I knew it! That's why I got shipped out here! So y'say th' real Emperor's back?"

Sober up and gather your soldiers.

"This sounds too good t' be true, but I ain't just gonna believe you as easy as that. I won't go rallying my forces up if this is a lie. You bring th' Emperor here and lemme see him with my own eyes. Do that, and I'm your man. Until then, I'm stayin' here... gotta get sober fast..."