Mushin's Tower is a building on an island located in the south-west of the Moonwater Plains. It is home to many merchants and other NPCs, that may be connected to some different side quests. It is also used as a meeting place for many high level players.
"Mushin's Tower" also often refers to the dungeons or Floors that are actually embedded into the building. Currently there are 20 floors that can be beaten. They are split up into three main parts:

from players that hit level 45 and accepted the prequest that is given by an invitation.
The atrium, also known as Mushin's Hall, consists of two floors.
The Trial Arena and the Tower of Infinity are extensions of Mushin's Tower, that can be accessed at the west of the atrium.
Located east is an extension holding several portals:

In addition to the listed NPCs, level 55 Training Dummies in a group of 3 and a solo one, are located there.
*Located on the Second floor.

In addition to the listed NPCs, there are also several level 55 Training Dummies. In addition to a standard training dummy, there is also a special Focus Recovery dummy and a group of three action-specific dummies that Block, Evade, or Counter.

In addition to the listed NPCs, level 55 Training Dummies in a group of 3 and two solo ones, are located there.

This room is currently unaccessable. 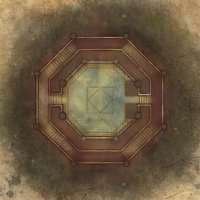 The corresponding quests, such as

, will update automatically with a new goal each time floor has been cleared. Most floors share the same look of the map, which just gets repeated.

The first floor of Mushin's Tower is decorated with six sculptures that will, upon usage, spawn an enemy. Each sculpture will spawn a specific enemy from a certain class.

Defeating the enemy will make the selected sculpture unusable, preventing from doing the same enemy twice. To advance further to the second floor, two enemies must be defeated.

Tip: The Force Master has one of the lowest HP and is easily burstable. 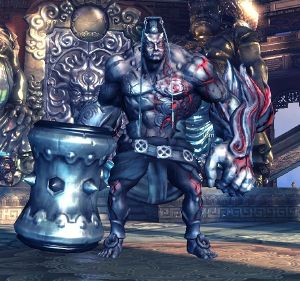 Defeating Silver Deva to clear the second Floor of Mushin's Tower and advance further is mandatory.

Tip: The strikes of Silver Deva, indicated by a yellow rectangle, will put a small fire AoE underneath if it hits a target. Even if the target parries or deflects the damage. Avoiding these strikes is very benefical.

The third floor consists of 4 waves of enemies that have to be defeated to gain access to Floor five. The first three waves are composed of a specific NPC and three of his followers.
There are also numerous of other smaller enemies already waiting at the floor.
Waves:

Tip: Clear a little portion of the other enemies, perferably with AoE, while defeating a wave and avoid pulling all of them at once as they can deal high damage.

At the fourth floor, the enemy to defeat is Pale Stalker Jiangshi. Podan the Humble and Chungsil are demanding, that a companion needs to be chosen, before the Jiangshi can be challenged. The companions that can be chosen, are the Tower Challengers from Floor 1. They are able to inflict status effects as joint attacks to CC the Jiangshi. To choose someone, an HP Pill, which is sold by Chungsil for 50

Tip: Use the joint attacks from the companion to interrupt the AoE, indicated by a yellow circle around him. Killing the little adds with AoE attacks is the easiest way to get rid of them.

A Hulking Augerite is waiting on floor 5, surrounded by four orbs, each having a different color and granting different buffs to the player. This fight has a time limit (4:30 min.) and can be seen as a simple DPS-Race. Every 45 seconds, another orb can be chosen to get a new buff. Orbs can only be used once during the fight. If no orbs is chosen for a given amount of time, they get unusable for another 45 seconds.

Tip: Before choosing any orb, bursting the Augerite and then using the red orb can be benefical for some classes as the RMB-Skill gets spammable. After red, green is very promising for another burst phase. Try to avoid getting the blue one.

A Wheel of Fate has been placed on floor 6 to choose the opponent one has to fight, to advance further. To spin the wheel, a Life Essence, which can be bought from Hongsil standing next to the wheel for 2

, has to be paid. After the wheel has been spun, an encounter will spawn and the Sacred Beast Recall Device left to the wheel can be activated to send the enemy away, giving the player another chance at the Wheel of Fate.

There are 5 possible encounters:

The Golden Pig is a form of jackpot from the wheel, as it has a low chance of appearance and doesn't put up for a fight. But it has the sideeffect of not dropping any items. All other encounters share the same percentage of appearance.

Clearing this floor will complete

Tip: The encounters share the same movement and abilities from the dungeon they're from. Azure Lord has multiple AOE attacks and Dokumo a high mobility. Rolling for the Golden Pig is recommended, when no other enemy can be beaten in a reasonable time. Ogong and Chief Hogdonny seem rather easy for all classes