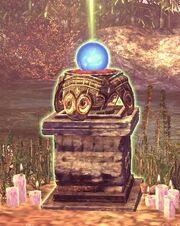 Mushin's Legacy is a mystical item which contains Mushin's immeasurable power. It has the power to battle against the Dark Lord himself, therefore it is a carefully guarded secret.

The Naryu Sarasva is a secret tome chronicling the method of obtaining it.

The legacy is accessed by having the heir of Mushin offer two specially crafted crests to the Wings of Mushin. The automaton bird will then take the rider to Mushin's Tomb where the legacy is kept.

The Golden Crest was crafted by the Jaofang tribe as a gift to Mushin. It was handed to the Shadowless leader Gumhang following Muyong's death.

The last remaining heir in Mushin's bloodline is Yunwa. She was controlled by Lusung using Dark Chi to open the Tomb and access the legacy. The hero stops Lusung from taking it for himself and ultimately decides to use Mushin's Legacy to save Yunwa's life rather than take it themselves to stop Jinsoyun. The legacy now resides within Yunwa.