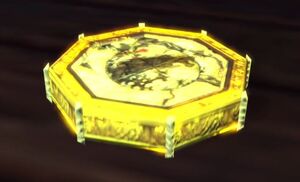 It was originally in the hands of the Stratus Empire within the capital until Tyrian High Cleric Gwihan stole it and fled. Later, Jinsoyun tracks Gwihan down and kills him in order to take Mushin's Compass from him.

Because the original compass's location is unknown, a new compass is crafted by the Jaofang to help the hero in their search for Mushin's Heir before the wrong people find the heir first. It is carved from the roots of the Elderbark Tree and the needle made from a Roc feather. The Roc were ancient birds that were Mushin's allies hundreds of years ago and can sense Mushin's bloodline. This helps identify Yunwa as Mushin's Heir.

Lusung later destroys the original compass after he deems it unnecessary as he stood before Mushin's Tomb along with Mushin's Heir, Yunwa.