Mushin the Divine Fist is a powerful martial artist, selected by the Heavens as one of the Four Guardians. He is one of the last remaining people from the ancient Naryu Empire.

Mushin was born the bastard child of the Naryu King and last in the line of succession. His mother was a royal concubine who died early in his childhood leaving him to be raised by the Three Sages. The Naryu King considered him as part of the family but his duties as ruler of an empire did not allow him much time to spend with his son. Meanwhile his siblings and the rest of the palace's royal members scorned him.

The Three Sages guided Mushin to ensure that he led a righteous life along with teaching him martial arts to combat his fear of bullies. Mushin grew up to become an intelligent, determined man of refined character and great ability. When Mushin came of age, he joined the Naryu military and quickly rose in rank with his martial arts prowess. As a General, he traveled extensively, settling disputes throughout the Naryu colonies. Despite his young age, Mushin won the respect and loyalty of soldiers everywhere he went, becoming the greatest, most respected officer in the land.

Mushin's brothers, jealous of his success and fearful of his might, worried that Mushin would ultimately steal the throne from them. They used their influence to spread the rumor that Mushin had planned to take the throne by force and framed Mushin for treason. The Naryu King had no choice but to arrest his own son which broke Mushin's heart. Condemned to a jail cell, he questioned all his efforts and years of service until then to win the King's affection and approval. It was then the seed of darkness was planted in his heart and he had given up on his people.

Instead, he focused his efforts on gaining more power. With the support of the Three Sages, he claimed Mushin's Tower by fighting his way to the top where he received power from the Divine Realm itself. For all his might and strength, the Heavens selected him as one of the Four Guardians to fight back the darkness in the world.

During the fall of the Naryu Empire, after the Naryu civilization had inadvertently opened a gate to the Dark Realm through excessive Soulstone mining, the situation appeared dire. In a desperate move to stop the darkness from consuming the world, he threw himself though the Dark Gate, sealing from the other side. Everyone revered Mushin for his noble sacrifice. However, his time spent in the Dark Realm latched onto the darkness already in his heart and corrupted him. Despite being described as a kind man before, he quickly changed into a being, hungry for power and revenge. He eventually escaped the Dark Realm through unknown means (it is suspected that Yura had something to do with his reemergence) and reunited with his fellow Guardians who were unaware of his change. 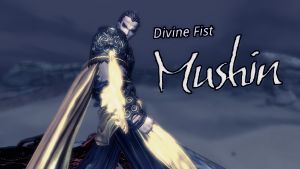 He helped stave off the darkness with the Guardians during the fall of Highland Central thirty years ago, sealing it within the Highland Palace. Some time after Jiwan had taken Jinsoyun as her pupil, he came to claim his birthright, the Twilight's Edge. As Jiwan was transferring her Chi to purge Jinsoyun of corruption, he struck, demanding the blade. Jinsoyun took the sword and fled upon her master's orders. Confronting Jinsoyun with Hong Sokyun and Iksanun at his side, he seized the opportunity to frame Jinsoyun for murdering her master and stealing her master's blade. Before Jinsoyun can speak the truth, he and Iksanun rushed forward to silence her. The weakened Jiwan leapt in the way of the attack, sacrificing herself for her innocent student. Jinsoyun, distraught and angry at her master's death, takes up the Twilight's Edge and engages the Guardians in battle. She manages to wound Iksanun severely and leave Mushin with a scar across his face before Hong Sokyun blasts her from Jiwan's Peak to her supposed death. Mushin, like the other Guardians, withdrew from the world due to his injuries.

In hiding, he disguised himself as Gil and became close friends with Yunsang, the leader of the Lumang Syndicate. He was charged with looking after Yunsang's adopted daughter, Yunwa, not realizing that she is in fact his descendant. When Yunwa reveals to him that she is Mushin's descendant and that she has absorbed Mushin's Legacy into her body, he drops his disguise and renders Yunwa unconscious, taking her with him to Mushin's Tower. It appeared that he had been in communication with Yura for some time as he explains to her the reasons why Jinsoyun keeps the hero with the Mark of the Black Rose alive. Mushin appears before the hero after Iksanun is killed and Jinsoyun makes off with the Talus Princess Yunma Fei back to Zaiwei. He feeds into the hero's desire for revenge and purges the hero of light in order to embrace the Dark Arts. 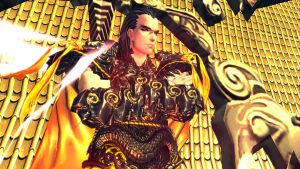 Mushin watching the hero from top of the Zaiwei Palace.

He meets with the hero at Mushin's Tower to test the hero's skills. He explains Jinsoyun's plans to use the Divine Mandate Ritual to usher in a permanent gateway to the Dark Realm that would plunge the world into darkness and corruption. He does not go to stop Jinsoyun himself as the world suffered due to his previous sacrifice. He keeps Yunwa as insurance against Jinsoyun's schemes in the event the hero fails to kill Jinsoyun. He sends Yura to deliver Yunwa to Jinsoyun upon the hero's failure to take their revenge.

He does not appear again until after Jinsoyun is defeated and the Dark Gate is closed. He stands upon the rooftop of the Zaiwei Palace observing the hero in amusement. He commends the hero on their accomplishments and wonders if they are aware of the true battle ahead. He laughs before disappearing once again.

Mushin reemerges after the events at Gunwon City left the reborn Jinsoyun in a comatose state. He compliments Zulia for assembing the fragments of the Twilight's Edge before swiftly choking her, aware of her motives in trying to summon the Dark Lord.

Prior to the unification of the light and dark paths in the original Korean version, Mushin had a different ending compared to the present patch. In the previous version, Mushin's motivations for wanting the Twilight's Edge were due to a fragment of the Dark Lord's soul lodged inside him from his time in the Dark Realm. Therefore, Mushin's actions were really the Dark Lord's influence on his will.

Mushin first sheds his disguise in front of the hero and Yunwa after they return from Mushin's Tomb. The hero is helpless to stop Mushin from taking Yunwa off in Dragon Pulse, and is therefore aware of where Yunwa has gone.

After the hero defeats Jinsoyun at the Alter of Divine Will, Mushin appears with Yunwa's unconscious body, taking the Twilight's Edge in triumph. He declares that he will no longer sacrifice himself for humanity and that he shall build a new world. He is shocked when the Twilight's Edge suddenly turns red and turns on him, stabbing him in the throat. Jinsoyun explains the Dark Lord's influence on Mushin before taking the sword and killing Mushin herself, finally taking her revenge.