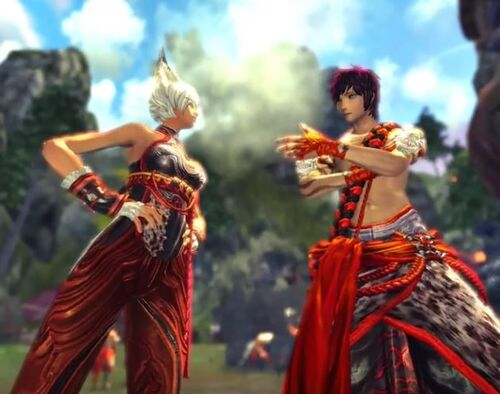 The Lycandi Tribe are among the many tribes of Moonwater Plains with a longstanding connection to one of the Sacred Beasts.

The Lycandi worship Lycan the Mighty as a god and pride themselves in being her descendants. There is some speculation as to whether they are indeed part wolf or not. The Greenhollow scholar Olgani has often wondered whether their ears are decorative as their tails are since not all Lycandi bear ears and they seem to have separate human ears as well. They do not take kindly to outsiders since the Talus Dominion had begun encroaching upon their domain.

They were led by Khoid the Quick up until he was killed fighting off Talus soldiers that were invading the Lycandi Den. His daughter, Salkhi the Swift became the next pack leader, but not without some dissent by rival Belen the Ready. When Lycan the Mighty awoke early from her purification stasis, Salkhi proved herself a mighty chief in battle alongside the hero, and Belen deems her fit to rule the Lycandi Tribe. Salkhi agrees to align herself with the Skyhaven Resistance in fighting the Talus Dominion.

The tribe is seen fighting alongside the other Moonwater Plains tribes during the attack upon the Talus Beastmasters Camp.