Lusung was a former student of the Hongmoon School who betrayed Master Hong in order to steal the secret Hongmoon techniques. He revealed that he had been working alongside Jinsoyun to steal the Twilight's Edge from Master Hong, secretly poisoning Master Hong to weaken him.

In Act II, Chapter 11, the source of Lusung's treachery is revealed. Lusung used to live with his mother, father, and older sister, Yujung in Sandstone Refuge and lived a relatively happy life. However, Dokdan mentions that he sensed some darkness within Lusung even before Colonel Yonkai murdered his family. 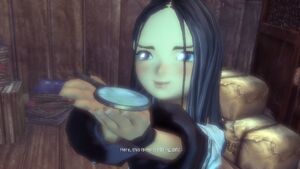 Yujung was planning on marrying her long time lover and neighbor, Hangwon, and was overjoyed in her preparation for the wedding. Lusung adored his older sister and gave her a special mirror as an engagement present. The Stratus Empire had just assigned Colonel Yonkai to the Cinderlands region and he came to visit Sandstone Refuge. He immediately demanded that they give the beautiful Yujung to him.

Lusung at the time was very young and was confused as to what was happening. He mentions in his diary that he didn't trust the Colonel and that ever since his visit, his parents would speak in hushed tones and his sister appeared to no longer be happy, even when talking about the wedding. When his sister and Hangwon disappeared, the villagers and his parents refused to tell him where they went or why they fled, but Lusung was determined to find his sister.

Rather than marry Yonkai, Yujung and Hangwon fled into the desert, but they were eventually found. Hangwon was executed and Yujung, still refusing to marry Yonkai, was sent to work in the mines until the end of her days. Colonel Yonkai's cruel treatment of the villagers of Sandstone Refuge intensified because of the actions of Lusung's family, so much that they blamed the family itself for their misfortune. Yonkai sent Hangwon's father, Yu Jungwon to work in the mines alongside Yujung and executed Lusung's parents and left their bodies at the edge of town, forbidding anyone from touching or moving the bodies.

Lusung attempted to rescue his sister from the mines by taking on the entire Yonkai Brigade but failed. He managed to kill a few soldiers before he left Sandstone Refuge, but not before entrusting Miryung, Yujung's closest friend, with the care of his parent's bodies. With revenge the only thing on his mind, he sought a way to seek enough power to seek vengeance on the villagers of Sandstone Refuge who would rather treat his family cruelly than defy Yonkai and Yonkai himself, for causing so much misery for his family.

Spending some years begging on the streets, he begged Master Hong to accept him as a student. He was eventually accepted and enrolled at the Hongmoon School and became a very adept martial artist. He believed that he could get his hands upon the secret of the Hongmoon Arts, but Jinsoyun approached him at some point, offering him even greater power through the dark arts. Seeing the school as be pathetic and useless in comparison the power Jinsoyun promised, he assists her in bringing down the Hongmoon School.

He is first seen standing on the Overlook at Heaven's Reach, sending a raven out presumably with a message for Jinsoyun. He jokes with the hero about being late to wake, calling them "Cricket" like everyone else. When Jinyung claims to have seen a mysterious woman in white, floating in the sky, Lusung jokes that she must be seeing things. He travels to the Duel Hall to join the other students in training. When the hero travels to the Proving Grounds, he is the "Masked Assassin" that challenges the hero. When the hero fails to defeat him, he tells the hero to train some more before returning. He then alerts the hero to a commotion happening outside. He is mysteriously absent during the battle against Jinsoyun and her henchmen. As a weakened Master Hong struggles to keep up with the fight, Lusung stands above him, taunting him that he ought to have just taken the secret Hongmoon Arts with how weak Master Hong had become. But also comments that from what he witnessed, the Hongmoon Arts were not that powerful to begin with. When Master Hong unleashes his fury in his true form, Lusung goes flying into a pillar, leaving him with a scar on the right side of his face.

He is seen again alongside Jinsoyun, Yura, and Gubong at the Twilight Pagoda, threatening Tyrian Cult High Cleric Gwihan to hand over Mushin's Compass. When the hero appears to stop them, the Mark of the Black Rose disables them. Lusung attempts to kill the hero, but Jinsoyun tells him that the hero still has a use to her. Lusung disappears with her into a Dragon Pulse. Jinsoyun charges Lusung to use Mushin's Compass to find Mushin's Heir and bring the dead body to her. Following the compass, he attacks Yunwa who is staying at Yehara's Mirage. Yehara comes and intervenes easily. He accidentally drops the compass, inadvertently revealing to Yehara that Yunwa is both Mushin's Heir and her niece. He takes back the compass before fleeing through a Dragon Pulse.

Lusung later kidnaps Yunwa from Colonel Yonkai in Smuggler's Den, using Dark Chi to hypnotize her. Rather than take her back to Jinsoyun as promised, he sees a better opportunity to gain immeasurable power and decides to use Yunwa to access Mushin's Legacy. At the Wings of Mushin, he watches from the sidelines as the hero's friends go into battle with the Yonkai Brigade as the hypnotized Yunwa activates the Wings of Mushin. He follows along secretly as the massive automaton bird flies Yunwa and the hero to Mushin's Tomb. There, he makes Yunwa kill the hero before he reveals his plot to take the Legacy for himself. He crushes the compass, having no need for it any longer and heads into the tomb with Yunwa.

Inside the tomb, he is amazed as Yunwa reveals the blue orb containing Mushin's Power. He swats Yunwa away, leaving the Dark Chi to kill her. Before he is able to reach for it, the hero fights him off. Just as the hero intends to finish him off he makes a desperate plea for his life, appealing to the fact he is the hero's former Hongmoon brother. Helpless, he watches as the hero chooses to use the Legacy to save Yunwa's life. In the Western version, he flees the scene through a Dragon Pulse. Limping out in disgrace, he watches Jinsoyun kill Yonkai herself, and begs for mercy for betraying her. Jinsoyun then infuses him with Dark Chi to grant him his wish of attaining power by turning him into a demon.

In the Korean version, after the hero stops him from taking Mushin's Legacy, fiends come forth from a Dark Dragon Pulse and pull him into the Dark Realm. 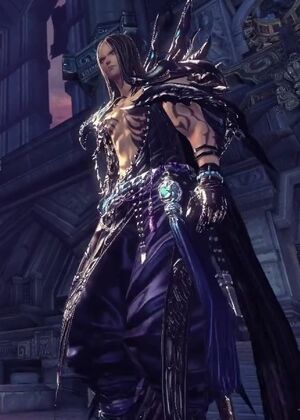 Lusung as the Raven King.

In the Dark Realm, Lusung asks for the power to take revenge upon all the people who wronged him in life, no matter the cost. The Dark Lord grants him his wish in exchange for his soul. Lusung is then granted immense power and becomes the next Raven King, lieutenant to the Dark Lord.

He returns to Sandstone Refuge, bringing with him a horde of tainted Grimhorn that begin massacring the villagers. When the hero arrives to save the village, he appears as the Raven King until his mask is broken. As he moves forward to attack the hero, Miryung steps in the way, dropping the mirror that Lusung had given to his sister Yujung long ago as an engagement present. He begins to recall painful memories of his past, causing him to flee through a Dragon Pulse.

Lusung then retreats to Khanda Vihar, the ancient sacred sanctuary of the Naryu Empire, where he works alongside the Ebondrake Cultists in mining Soulstones and opening Dark Rifts.

He awaits the hero to battle their way through Skybreak Spire, where he finally faces off against the hero.

Yujung thanks the hero for sparing her brother's life, but explains that she cannot approach him with the Dark Chi still corrupting his body. The hero uses their Chi to free Lusung of the darkness finally. Yujung's spirit appears before Lusung, and kneeling before his sister, he cries into her arms. He thanks the hero for all that they have done for him and regrets the things he did under the influence of his anger and hate. He recognizes the hero's power though, he mentions he will always call the hero "Cricket". He hopes that he will one day be able to follow the same path as the hero.