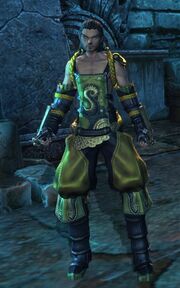 Dusk Adder uniform, one of the factions of the Lumang Syndicate.

The Lumang Syndicate is a vast, criminal organization made up of many different factions which are located all over the Earthen Realm. They are at war constantly with competing groups like the Blackram Marauders and the Yes Men. Under their leader, Yunsang, they used to have noble intentions of stealing from the rich and giving to the poor. However, when Yunsang disappeared in search of his daughter, Yunwa, the syndicate fell into disarray and began stealing lawlessly.

They have been known to have dealings with other criminal organizations such as the Hao Society in Zaiwei.