Ku Yang is Gunma the Starblade's successor to the Eight Masters.

Ku Yang hailed from the poor Gebang District in Gunwon City. He studied at the Silverfrost School under Gunma the Starblade, one of the original Eight Masters. Ku Yang woke up early one day to see his master Gunma leaving for the Viridian Coast upon one of Madun's predictions. Ku Yang asked about a small red string he carried about with him and learned that Gunma had been present when Jinsoyun was still Jiwan's student. When Gunma gave his life to save the Hongmoon warrior, Ku Yang was selected as Gunma's successor.

He, along with the other successors to the Eight Masters were unsure of how to handle their new responsibilities and at some point were approached by Sanzu, the last of the original Eight Masters. When she asked them to partake in her plan to kidnap young Jinsoyun, Ku Yang was unable to go through with it and defected from the rest. With the Ebondrake controlling Gunwon City and the odd behavior of the Empress Dowager in the Dasari Palace, Ku Yang sought out the hero's assistance.

Ku Yang travels to Bamboo Village where he sends a rock flying through Dodan's door with a letter attached requesting an audience with the hero. He asks that the hero signal them at the lighthouse and that they come alone if they wish to learn of Jinsoyun's whereabouts. He comes disguised in a mask, asking if the hero is truly the Hongmoon warrior, but before they can continue, Dodan arrives with the Bamboo Guard. Feeling that his trust was betrayed, he asks that the hero seek out Ku Yang in Gunwon City before disappearing.

He travels to Gunwon City via a merchant ship called the Excelsior three days before the hero arrives to set things in motion. 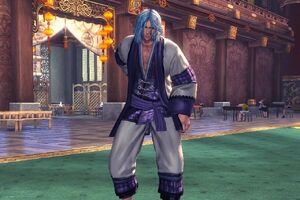 In Faircloud Harbor, the hero encounters Ku Yang disguised as a beggar named Nokku being beaten by Blackram Agent Dokgom and a couple other Marauders. He feigns ignorance when the hero asks him if he has heard of Ku Yang, but suggests the hero visit the courtesan Bae Ling in Brigand's Row who may know something more. He travels ahead to let Bae Ling know of the hero's arrival. However, before the hero can arrive, one of Bae Ling's clients starts causing a commotion. Once the hero rescues Bae Ling and Ku Yang, he tells the hero that he will meet them at the Faircloud Harbor docks.

After the hero helps Harbor Manager Na Kanil apprehend slave traders at the docks, Ku Yang catches up, impressed by the hero's fighting prowess. He tells the hero to go search for the ship in question in central harbor where the Excelsior's Trader Captain Jin Bae had been imprisoned by the Ebondrake. Ku Yang appears in the Ebondrake prison after they rescue the captain to give the hero his special badge that will help them through the dangerous Gebang District.