Juwol is a tall, powerful Blade Master and the leader of the Yes Men, a group of pillaging, clumsy men devoted to only serving her. She has a very fiery temper and seeks Yunsang to get her revenge.

Originally, Juwol and Yunsang were lovers and the Yes Men and the Lumang Syndicate worked side by side. Together, they were a power to behold in The Cinderlands. But Juwol felt betrayed upon learning that Yunsang had a daughter and kept it a secret from her. In her anger, she attempted to drive Yunsang and the Lumang Syndicate from The Cinderlands. The battle between Juwol and Yunsang left Juwol without her right eye and a thirst for revenge.

She scours the Cinderlands in search of Yunsang who had gone missing for some time. Meanwhile, she is at odds with the gunslinger, Soha, for killing some of her men in the deserts. 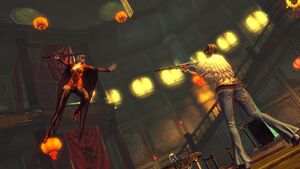 Eventually, she catches up to Soha at Yehara's Mirage where they destroy the main floor with their battle before Yehara herself comes and breaks up the fight.

She decides to assist Yunwa in infiltrating the Naryu Tomb to find information about Mushin's Legacy. Later on, she kidnaps Yunsang's best friend, Gil, who she makes a deal with that in exchange for the Silver Crest, she will help the hero attack Yonkai at Blindeye Bazaar and rescue Yunwa. She takes the Silver Crest, however is captured by the Bonemask Tribe alongside Soha. The hero frees them only for Juwol to bicker and fight with Soha. Yehara arrives and breaks the two of them up in order to make a plea to the hero to save Yunwa. Juwol and Soha travel with Yehara to the Wing's of Mushin to wait for the hero to arrive with the crests.

At the Wings of Mushin, she fights off the Yonkai Brigade with Yehara and Soha as the hypnotized Yunwa activates the Wings of Mushin. Juwol witnesses Jinsoyun killing Yonkai and the entire Brigade and disappearing before Yunwa and the hero return. She chides the hero that they made a foolish decision to give up godly power to save one little girl. She plans to return and take back her Yes Men from the upstart Tanghong.

Juwol makes her way to the capital Zaiwei, after hearing rumors that Yunsang was causing trouble in the trade routes at Grand Harvest Square. She sets up shop at Granny's Inn hoping to hear rumors about Yunsang with little luck at the beginning. She isn't entirely pleased to bump into the hero, but is intrigued by their new, darker demeanor. Her mood isn't made better upon realizing that everyone including Yu Chun and the hero are on the lookout for Yunsang.

She overhears a Zoraxi discussing a job Yunsang hired them to do that they turned down. Angered that Yunsang has been hiring them to kidnap young girls, she sobers up and heads to the Yes Men Quarters at Rural Outfitters. She grabs a map of the Beastbog and immediately heads out, just missing the hero's arrival at the Yes Men Quarters.

She heads to the Beastbog where he was last seen but was unable to battle him as she had been poisoned by the Beast Brigands. After she was revived at Rural Outfitters, she explains to the hero her history for Yunsang and her reasons for tracking him down. It came as a deep surprise to her to learn that Yunsang's daughter was in fact Yunwa from the hero. She frowns at the idea that he was kidnapping young girls in order to find his daughter Yunwa after all the trouble he had gone through with her to keep her a secret. She felt even more betrayed that he left her to die twice and vowed to have his head.

When she learns of a the fake public execution of his daughter at Rural Outfitters, she hurries over to rescue Yunsang just as he was about to be subdued by the Talus troops and the hero. However, as she is about to help Yunsang up from his knees, he takes Yu Chun's daggers in his back to save her. Distraught, she cries over Yunsang as they are both hauled off to the Talus Dungeon.

However, within the dungeon, she tells Yunsang of the things the hero did in order to save Yunwa. When Yunma Fei, Junghado, Dochun, and the hero come to break them out of prison, she and Yunsang stay behind to fight off the coming guards for the rest to find a better path of escape. She expresses her happiness to be fighting at Yunsang's side again.

Heavily wounded from the battle, she and Yunsang make their way to Stratus Haven where they bicker. When the Talus forces show up, they follow Dochun and Yunma Kahn through a Dragon Pulse into the Shiverstone Range while the hero fights off the Talus rangers. In the Shiverstone Range, she sees the hero briefly at the Herbside Inn where she and Yunsang are still tending to their injuries while hiding from the Talus forces. She tells the hero that Dochun went on ahead to the Explorer's Base Camp, but she was unable to follow due to her injuries. She agrees to help the hero fight Jinsoyun, that when she is fully healed, she will make her way back to Zaiwei and wait for the hero there.

In the final battle with Jinsoyun, she fights alongside the hero's allies against the demons within the palace.

Following the battle, she is found drinking with Soha at Yehara's Mirage, in a drunken rage that Yunsang left her yet once again to go live the life of a monk in Stratus Haven.