Junghado is an exceptionally skilled swordsman and the royal bodyguard to Princess Yunma Fei. He has been with her since childhood and is devoted only to her. He has his own special task force within the Talus Guard known as the Order of the Gilded Blade which he specially trained himself.

Junghado was an orphan with no possessions, no respected ancestry, no clan, or any other future prospects beyond begging and stealing. However, his sheer will and determination caught the eye of a patient monk, Priest Hyundam, at Snowforest Monastery. He was taught the art of swordsmanship by the battle monks at the monastery, becoming one of the best swordsmen in the Realm. He eventually participated in the Royal Martial Arts Championship, becoming the undisputed winner. Despite being offered the chance to become a Talus officer or leader of the elite forces, he chose instead to become bodyguard to the young Princess Yunma Fei. 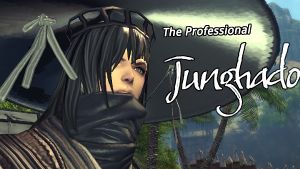 The hero first meets Junghado when he arrives at Wayfarer's Wharf in search of the Skyhaven Commander, Yunma Fei. He had been away in Zaiwei on Skyhaven business but came when he learned that the Commander had gone missing. He arrives by boat and is promptly attacked by Blackram members on sight, which he deals with swiftly. He attacks the hero, believing that they are also a pirate. When the hero assists him in fighting off more Blackram forces, he apologizes for assuming they were an enemy. He accepts the hero's help in escorting him through the Blackram forces before they speak.

He is surprised to learn that the Redguard Shin Hai (who is Yunma Fei in disguise) entrusted the hero with the Skyhaven Badge. He entrusts the hero with securing an alliance with the Snapjaw in the Sapphire Basin. He tells the hero to go to Angler's Watch and ask for the Skyhaven Agent Bondu to discuss the hero's next move. He then departs to handle his own matters and wishes the hero safe travels.

Junghado sees the hero again at the Skyhaven Bastion which has been invaded by Talus forces.