Jiwan (Korean version: Biwol), the Righteous Blade, was a legendary martial artist select by the heavens as one of the Four Guardians.

During the era of the Naryu Empire, she worked with the other guardians to fight back the Dark Chi from the Earthen Realm. She was bestowed the Twilight's Edge, a powerful, mystical sword capable of combating the darkness.

Despite being a master swordsman, she never took on any formal pupils. There were those who followed in her footsteps and learned from observation that became the Silverfrost Clan, training up near Jiwan's home in Silverfrost Citadel.

Jiwan rescuing a young Jinsoyun during the fall of Highland Central.

During the fall of Highland Central, Jiwan joined her fellow guardians and the Sacred Beasts of Moonwater Plains in fighting back the demons flooding the city. As they worked to contain the darkness within the city, she happens upon a young Jinsoyun who was heavily corrupted by Dark Chi and dying. Despite the disapproval of the other guardians, she uses her chi to heal Jinsoyun and takes her in as her first and last pupil. Though her training was harsh, she showered Jinsoyun with motherly love.

Meanwhile, Mushin had become corrupt with a thirst for power due to the time he spent within the Dark Realm, unbeknownst to the other guardians. Jiwan urgently calls for Jinsoyun to meet her at her home up at Jiwan's Peak. As Jiwan was transferring her Chi to Jinsoyun to purify her, Mushin came and struck her down. Weakly, Jiwan tells Jinsoyun to take the Twilight's Edge and run.

Jinsoyun runs down the steps from Jiwan's Peak, sword in hand until she is confronted by Hong Sokgyun, Iksanun, and Mushin. Seizing the opportunity, Mushin proceeds to frame Jinsoyun for killing Jiwan and stealing her sword. Before Jinsoyun has a chance to tell the truth, Mushin rushes forward to silence her.

Jiwan sacrificing herself for Jinsoyun.

Jiwan steps in the way of his attack and sacrifices herself to save Jinsoyun. Jinsoyun, distraught and angry at the death of her master, rushes forward with the Twilight's Edge and engages the other guardians in battle. She manages to leave a scar upon Mushin's face and severely injures Iksanun before Master Hong send her flying off of Jiwan's Peak with a powerful blast. Though the guardians assumed Jinsoyun to be dead after falling from Jiwan's Peak, Jiwan's spirit who was watching from the Divine Realm, saw Jinsoyun's descent into darkness and sought to find the one who could stop her pupil's plans—the last student of Master Hong.

She appears in the sky above Heaven's Reach, watching the hero. Jinyung notices her, but is unsure of what she saw.

When Jinsoyun attacked Heaven's Reach and presumably killed Master Hong and all his disciples, Jiwan appears to the hero, who had fallen into the sea, saving their life. She tasks them with stopping Jinsoyun. She then lights a beacon to guide Dochun to their body. 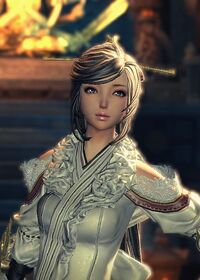 Jiwan's spirit appearing before the hero.

Jiwan appears before the player again after Yunwa, under Lusung's control, stabs the hero and leaves them to die in front of Mushin's Tomb. Jiwan heals the hero's wounds, telling them that their work is not yet done, and urges them to protect Mushin's Legacy.

Jiwan carrying a purified JInsoyun to the Divine Realm.

Her spirit finally shows itself in person at Jiwan's Peak in the Silverfrost Mountains, after the hero's chi was finally pure enough for her to appear. She explains how Mushin used to be kind man before he was corrupted within the Dark Realm. She tasks the hero with stopping Jinsoyun begs the hero to save her at the same time.

After Jinsoyun's defeat, Jiwan appears at Heaven's Reach alongside the spirits of the hero's former Hongmoon classmates. She requests that the hero give Jinsoyun a second chance at life, free of darkness. The hero uses the Hongmoon Arts to purge the Dark Chi from Jinsoyun, reverting Jinsoyun back to her child form. She thanks the hero before she takes Jinsoyun, along with the spirits of Master Hong and the Hongmoon students, to the Divine Realm.

Jiwan sends Jinsoyun back to the Earthen Realm in the form of a child along with a letter requesting that the hero take Jinsoyun in as their pupil. She explains that Jinsoyun's power needs to be guided on the right path as she still has a purpose in the Earthen Realm.