Ilsim was born in Brightstone Village, to Kuwin, the Brighstone Mayor's daughter. Kuwin never revealed who his father was, fearful that the wrong people would use the information for evil intentions. Growing up, Ilsim was often bullied and mistreated for being a bastard child. Even so, he lived happily with his mother and grandfather. 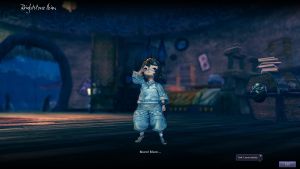 Sixteen years ago, Jinsoyun led the Talus army into Brightstone Village in search of Iksanun and to secure the Soulstone Mine for her use. The Talus army lit the mayor's home on fire where the Brightstone Mayor Taywo's daughter, Kuwin, and her young son, Ilsim were hiding. Ilsim cried for help as Kuwin was severely injured and the fire trapped them inside. Madun the Mistwalker arrived to put out the flames, but was too late to save Kuwin. Kuwin, with her dying breath, begged Madun to rescue her son and take him to Mayor Taywo.

The surviving villagers attempted to use the Skygate to flee, but Jinsoyun used her dark powers to prevent their escape, killing many of them. She forced Dark Chi upon Madun, who she mistook to be Iksanun, accidentally marking the Lyn with the Mark of the Black Rose. Since then the Talus Dominion has occupied Brightstone, using the villagers as slave labor to mine large quantities of Soulstones.

Mayor Taywo raised Ilsim, continuing to keep the identity of his father a secret as Kuwin asked. Growing up, he blamed Iksanun for bringing the Talus Dominion to his village and not even returning to help when they were suffering. He branded Iksanun as a traitor and the reason his mother is dead.

The hero first meets Ilsim as they drop out of the sky from a Dragon Pulse, falling upon some Talus soldiers that were chasing him. Ilsim brings the unconscious hero to Mayor Taywo's home to recuperate. When Mayor Taywo is wrongly accused of treason and imprisoned, Ilsim and the hero lead a rescue mission into the Soulstone Mine to free the Mayor and other Brighstone Uprising Lyn. Fearful of Ilsim's safety, Mayor Taywo asks the hero take Ilsim with them to Greenhollow where they should seek out Iksanun.

Landing right inside Iksanun's home, Ilsim is surprised to see Iksanun who had been missing for some time. Calling Iksanun a traitor, he tells the hero he refuses to talk to him and runs out. Mayor Taywo contacts Ilsim, asking him to act on Brightstone's behalf as their representative in a meeting with the Skyhaven Resistance leader, Yunma Fei.

At some point, Jinsoyun approaches Ilsim, promising to remove the Talus forces in Brightstone if he can bring her the leader of the Skyhaven Resistance. Ilsim informs her of the meeting location in the Fish Stocks. When it turns out that the leader of the Skyhaven Resistance was just a body double, he instead offers to bring her Iksanun. Jinsoyun takes Ilsim with her to bait Iksanun into a trap. In preparation, Jinsoyun has Yura deliver a message to Iksanun at the Sealed Palace in the Highland Necropolis that she has his son, Ilsim, at Brightstone Village. Jinsoyun presents Ilsim with the Twilight's Edge in the form of a small dagger, goading him to take his revenge upon Iksanun.

At the Skygate, after Iksanun and the hero defeat Yura, Ilsim comes up behind Iksanun and stabs him with the dagger, filling the him with Dark Chi. Jinsoyun comes and restores the Twilight's Edge to it's true form, killing Iksanun. Ilsim demands that Jinsoyun keep her promise. Jinsoyun announces that Brightstone Village is indeed free and that he should go see for himself.

He runs into the village, excited to see the people of Brightstone free at last. He is horrified to discover Mayor Taywo severely corrupted by Dark Chi. Mayor Taywo begs Ilsim to flee as all of the villagers were being turned into demons. He explains that he must kill himself in order to not turn into a demon himself, but asks that Ilsim seek his father, Iksanun, who will look after him. Ilsim watches as Mayor Taywo commits suicide in front of him. Ilsim comes to the horrible realization that he had just killed his father and doomed his entire village.

In the Western version, Ilsim cries, falling to his knees as the villager demons surround him. It is assumed that he is killed by the demons.

In the Korean version, Ilsim, unable to live with what he had done, stabs himself with a dagger. His dead body is surrounded by the demons.