Hae Mujin, in a quest for power, accepted the demons lure which inevitably caused his entire fleet to fall into chaos. As his body was rapidly corrupted by Dark Chi, he had Tae Jangum and Mak Sobo take his granddaughter Poharan and run. He did his best to fight the Dark Chi in his system, but the darkness slowly overwhelmed him, enveloping him within the demon Taikhan. 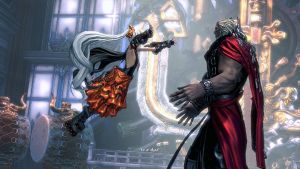 Hae Mujin reunites with his granddaughter after being saved from the demon.

The hero arrives at the Shattered Masts with a partially reforged Twilight's Edge and uses it to sever him from the demon. He joins the hero in defeating the remaining demon. He embraces his granddaughter, reunited at last, letting her know that it was going to be okay. He apologizes to the hero for foolishly accepting the demons aid in his quest for power. He still feels the Dark Chi within himself, but plans to fight against it, for both his sake and his granddaughter.

When the hero returns to the E. Fleet Supply Chain to ask for passage to Gunwon City, he has been dealing with strange demonic pillars on his ship for some time. He supposedly sent a letter out to the hero, but the hero arrived before they received the letter. He waits for the hero by the Lightstone where he informs the hero of the situation regarding the black pillars threatening to turn the Blackram fleet into a second Highland Necropolis. He upholds his bargain and takes the hero to Gunwon City after they purify the black pillars.