Doyung was a Stratus Army General serving the royal family in Highland Central. He was deeply loyal to Prince Sogun and Princess Solaan, serving with a strong sense of justice.

He was a long time friend of Snapjaw Chieftain Hammerjaw. 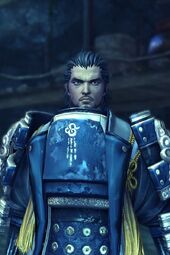 Stratus Director General Doyung during the fall of Highland Central.

Thirty years prior, Doyung lived in Highland Central with his wife, Lee Sunghui, and his son, Doyuhan. However, during the mysterious event that caused demons and Dark Chi to flood the city, he ordered his forces to contain the darkness within the city. He took citizens to the Highland Refuge hoping to get them to safety, but realized that there was no escaping the Dark Chi. Seeing the dire situation, he saw no other choice but to kill everyone tainted by Dark Chi, including his own wife. He entrusted his son to Stratus Officer Hojao, hoping that his son would make his way to safety.

He made his way to the Highland Gate where they asses the best way to fight back and contain the darkness until help can arrive. There, he met with a Brightstone Soulstone Cutter named Gibong, who informed him of a strange ritual which required a vast amount of Soulstones. Not entirely sure of the details, it appeared that the ritual when wrong, opening a gateway through which demons poured into the city.

Despite not being entirely sure of the Prince and Princess's involvement in the matter, he felt duty bound to find them and help them no matter what. He asked one of his soldiers to scout ahead to the ritual site while he finishes business at the gate.

Within the Royal Treasury, he was relieved to hear that the Snapjaw Tribe have come to their aid and that the Four Guardians had been summoned. Until then, he took a soldier with him to search for the royal family within the treasury.

Doyung and the soldier met with Chieftain Hammerjaw who was glad to see his friend. However, Doyung revealed that he had been tainted a while back and began to succumb to the Dark Chi. Dying, he asked the soldier to go seek the prince and princess in his stead.

Doyung asked Chieftain Hammerjaw to end his life with dignity. By the time the soldier returned, Doyung was already dead.

Doyung remains in the Earthen Realm as a Risen undead. Chieftain Hammerjaw asks the hero to help in destroying Doyung in order to scatter enough of the dark energy within the city to allow the hero to see into Highland Central's past.

Before meeting with Doyung, the hero and Chieftain Hammerjaw encounter Lee Sunghui's spirit in the Fallen Refuge, begging for them to not destroy her husband completely. She explains that her husband, along with all the other spirits in the city are trapped reliving the horrific day they died over and over again.

Doyung's corrupted spirit engages them in battle until he begins to come to his senses. He appears confused at first before realizing the horrible things he has been doing since he became a corrupted spirit. He comes to terms that he has been a prisoner of his remorse and thanks his friend, Chieftain Hammerjaw, and the hero for their help.

Chieftain Hammerjaw and the hero defeat a risen Doyung Brigade Captain Chan and his undead soldiers. Doyung thanks them for putting his comrades to rest and for allowing him to finally join his wife in the afterlife. His spirit then disappears with his wife.

Doyung's spirit does not stay away for long as he discovers that Prince Sogun's spirit was being used by the Dark Realm for their own nefarious purposes. He requests that the hero defeat Asura, the demon that Prince Sogun has become as a daily quest in the Sogun's Lament dungeon.