Skyhaven First Officer Doyuhan was the second-in-command of the Skyhaven Resistance. He is constantly plagued by nightmares of the day Highland Central fell.

Thirty years prior, Doyuhan lived in Highland Central with his mother, Lee Sunghui, and his father, Stratus Director General Doyung. When the city mysteriously became overwhelmed by Dark Chi and demons, his father led civilians to safety within the Highland Refuge, only to realize that many of them had become corrupted by Dark Chi. Upon his mother's urging, Doyuhan reluctantly left with Stratus Officer Hojao to safety, never to see his parents ever again. 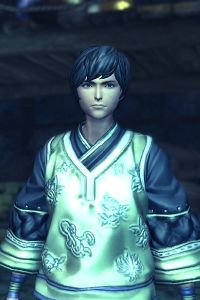 Young Doyuhan within the Highland Refuge.

Hojao raised Doyuhan as his own until he was able to serve in the army. At that point, the Talus had declared their independence and Hojao was assigned to the Besieged Camp fighting the Talus forces on one side and the undead Stratus soldiers on the other. Hojao dismissed Doyuhan in order for him to lead a better life elsewhere.

He traveled to Dominion lands in order to pursue a simpler life where he began to see the struggle of honest, hardworking folk around him, suffering under Talus oppression. He formed a coalition of willing people, dedicated to pushing Talus lords and governors who took advantage of their subjects. But his soldiers were poorly armed and underfed, clearly unable to take on the Talus empire alone.

Yunma Fei approached him in disguise one day with a proposition to provide the supplies and manpower necessary to take down the Talus Dominion. Doyuhan immediately agreed and accepted her as commander, forming the Skyhaven Resistance.

He hired a mercenary named Ugum to aide in their battle and uncovered the fact that the Talus were searching for their princess who had been missing from Zaiwei for some time. He saw it as a powerful leverage against the Talus Emperor.

At some point Yura approached him, revealing the true identity of the Skyhaven Commander as none other than Talus Princess Yunma Fei. Feeling betrayed and used, he began to secretly undermine the Skyhaven Resistance.

When Stratus General Hojao requested reinforcements from the Skyhaven at the Besieged Camp, Doyuhan purposefully intercepted the letters, making it appear that the Skyhaven ignored them or otherwise did not wish to help. Within the Skyhaven itself, he managed to turn many to his side by revealing Yunma Fei's identity as the Skyhaven Commander. He also ensured the failure of alliances between the Skyhaven and the Crafting Guilds by leaking information to the Talus of where key meetings would be. He attempted to sabotage alliances with the tribes of the Moonwater Plains as well until the hero came along.

Doyuhan first encounters the hero on their way to the Hall of Ogong in Monkeystone. He is surprised to see the hero in the area on top of carrying the Skyhaven Badge. He is unsure of who the Redguard Shin Hai is, but assumes that the commander must still be alive despite being missing for days. He asks the hero why they are assisting the Skyhaven Resistance and is intrigued that the hero is seeking an audience with the Sacred Beasts. He then asks the hero where the Redguard Shin Hai went after handing the hero the badge, but thinks better of it and makes an excuse that there may be Talus spies nearby. He tells the hero that he and Ugum will be working to weed out Talus spies as the hero goes off to meet Ogong. He offers some advice about Ogong's method of approaching outsiders before leaving with Ugum.

Doyuhan has Ugum lead the Talus forces into the Skyhaven Bastion when Yunma Fei arrives with Junghado and the hero. Doyuhan had Ugum tell them that he was in trouble somewhere in the base so that while Junghado and the hero come find him, Ugum would have a chance to kill Yunma Fei. He feigns ignorance as to how the Talus forces managed to invade the base while the Skyhaven Commander was away. He tells the hero he is glad that the Skyhaven Commander Yunma Fei is still alive and has a plan to drive out the Talus. He comes with the hero and Junghado to see Yunma Fei, but arrive to see her fighting Ugum who had made an attempt on her life. Ugum flees the scene.

Doyuhan, Yunma Fei, Junghado, and the hero go to save captive Resistance members, but arrive too late to save them. They discover that the Talus were using a Great Dragon Pulse to allow their armies to travel into the Skyhaven base. Doyuhan asks that Commander Yunma Fei allow him to go after Ugum while she goes to speak with Iksanun about how to secure the Great Dragon Pulse for themselves. He turns to the hero and request that they meet him at the Watchtowers.

At the Watchtowers, he tries to explain Ugum's betrayal as a the Skyhaven's mere inability to pay him properly due to a shortage of funds. He charges the hero with confronting Mercenary Scouts nearby who may have information on Ugum's whereabouts. When the hero brings back the Strike Unit's Encoded Orders, he pretends to not understand the coded words. Instead, he tells the hero to focus on recruitment by heading southeast with him to the Besieged Camp to hopefully get Stratus General Hojao's support. He explains why he trusts Hojao, who served under his father and saved his life. Feeling guilty over the choices he's made, he asks the hero to request the General's assistance on his behalf.

Doyuhan is genuinely surprised that the hero was able to convince Hojao to aid the Skyhaven Resistance. He goes to gather the scattered forces while the hero makes their way to the Skyhaven Stockade where he had hoped the hero would be captured by the Talus troops that have already invaded the secret location. He arrives in time to silence Bak Reechun, another Skyhaven betrayer, from saying anything more. He apologizes for his lateness due to the number of Talus forces in the area. He tells the hero that Yunma Fei and Iksanun went to the Brightstone Ruins to investigate how the Talus entered the Skyhaven base so easily. Meanwhile, he plans to go and find Ugum, welcoming the hero's offer to help. Back at the Watchtowers however, he decides to look for Ugum on his own while the hero goes to assist Junghado over at Skyhaven Perch.

When Doyuhan receives news that Yunma Fei, Iksanun, Junghado, and the hero have managed to secure the Great Dragon Pulse and plan to create a diversion in the Beastmasters Camp to access the Skygate, he has his Skyhaven betrayers guard the Skygate. He then notifies Talus General Yongwan of the plan before lying in wait for the hero to come try to kill Ugum in the Beastmasters Camp. He has the mercenaries knock the hero unconscious and locked away in a case at the Talus Forward Base. He approaches General Yongwan to remind him of the deal that he would become the next governor of the Moonwater Plains. He reassures the general that Lady Yura will bring forth a captured Skyhaven Commander as well. He is caught off guard when the Moonwater Plains tribes actually arrive to assist the Skyhaven in the seige at the Talus Forward Base. He silently slips away amidst the chaos into Brightstone Village.

He battles alongside the Talus against Hojao and the Skyhaven Resistance near the Soulstone Mine but is quickly defeated. Angry and wounded, he manages to flee once again to the Skygate where he is relieved to see Yura and he Skyhaven defectors arrive through the Great Dragon Pulse as he had told them about.

Injured, he stumbles up the Skygate steps where he confronts Yunma Fei, revealing her true identity as Talus Princess to everyone around her. He explains how betrayed he felt as all he wanted was peace but Yunma Fei appeared to have drawn them into a war, using the Skyhaven Resistance as pawns. He betrayed the Skyhaven as he no longer wanted to be a part of the same team as their most hated Talus enemies.

He crawls towards Yura, begging for help. Yura coddles him before turning him into a demonic fiend that is quickly destroyed by the hero and their allies.