Dodan (Korean version: Do Dan-Ha) is the Bamboo Guard Captain Dochun's son and Namsoyoo's adoptive brother. He is well known by the residents of Bamboo Village for his reckless actions. Despite his outward notions of being over confident with a hero complex, deep down, he only wishes to live up to his father's expectations. He is often seen in the company of his best friend and fellow Guard member, Chengun.

When Dochun was still a Stratus Royal Guard Captain, he arrived home bloodied and holding a small baby in his arms. Young Dodan at the time asked for the baby's name to which Dochun replied, "Namsoyoo," after some hesitation. Since then, he became inseparable from his adopted younger sister, always going everywhere together.

Wanting to follow in his father's noble footsteps, he became a member of the Bamboo Guard but often found himself not living up to his father's expectations. Often rushing into things without thinking, he always has good intentions yet ends up causing more problems for the Guard than he solves.

Dochun introduces Dodan to the new Bamboo Guard recruit, Chengun, hoping that Dodan might be able to show him around. Dodan immediately takes him as an assistant (though not formally) and they become fast friends.

As the Blackram Marauders raids become more frequent, Dodan looked for ways to fix the problem himself, often going missing when the battle starts leading many to believe that he may be the spy with the Bamboo Guard ranks.

Dodan discovers a map noting where the secret Blackram Camp location and decides to head on in alone to prove himself to his father. Right before another Blackram raid on Bamboo Village, Dodan and Chengun take off from their post and sneak towards the coast to infiltrate the Blackram Camp. However, the plan goes awry and Dodan ends up captured by the Blackram in a cage.

The hero arrives to free Dodan and fight of the Blackram Rookies guarding him. Feigning confidence that it was all part of his plan, he explains that he overheard that the Blackram flagship is filled with ammo and explosives. He decides the best thing to do is fire a cannon at it in order to blow the ship up and cause the Blackram to retreat. Rather than risk his own skin on lighting the cannon, he has the hero do it in his stead. The explosion successfully goes off which causes Blackram Captain Gwon to confront them. The hero manages to wound Gwon before he flies away on a kite glider. Dodan revels in the fact that Gwon retreats with the Blackram Marauders, but does admit that he will return, potentially quite angry. He informs the hero of how to Windstride in order to return to the village and rally everyone before the Blackram return.

He begs his father for a real assignment until Dochun decides to assign Dodan to assist the Guard at Foshi Pyres. However, Dodan's fears get the better of him and he is unable to bring himself to go. He manages to make it to the Bamboo Lookout in Everdusk where he asks the hero to go to Foshi Pyres in his stead, requesting that the hero explain that Dochun ask him to send the hero. He desperately wants to save face in front of his sister and quickly dismisses himself after sending the hero on their way.

Deeply ashamed of his cowardice, he set out to redeem himself in the eyes of his father. He hears word of Lumang Dusk Adder activity on Songshu Isle and follows the information trail into the Adder's Nest. There he is captured by a Dusk Adder sentry and locked in a cage. The hero comes to free him and together, with Chengun, fight their way through the Adders Nest and face off against Dura to retrieve Bumbak's stolen bag. He leaves with Chengun ahead of the hero, asking the hero to not make any mention of his presence in Songshu Isle lest his father berate him later.

Dodan becomes increasingly concerned for his sister when the Blackram kidnap her while Dochun was away at Stillbrook Monastery. Unable to see Dodan worry so much, Chengun goes with the rescue party to the Blackram Narrows in his stead. The hero manages to rescue Namsoyoo and she returns to the village safely. However, the victory is short-lived as Gwon leads the Blackram in a raid of Bamboo Village in search of Namsoyoo.

Dodan fears for his sister's safety and rushes into their home to fight Gwon himself. Dodan is left severely wounded, looked after by his father while the hero goes to save Namsoyoo. After the Blackram leave and Dochun sends the hero on their way to Oakshade Village, Dodan, injured and delirious, helplessly calls out for his sister. Chengun helps look after him in his recovery.

When Dochun discovers that Namsoyoo is in Zaiwei, Dodan and Chengun accompany him there, staying in the sidelines while Dochun participates in the Royal Martial Arts Championship in hopes to gain an audience with Namsoyoo. Dodan is still recovering from his injuries and worries for his father, when he briefly meets Gwon who has also come to participate in the championship.

Following the prison break out, where Yunma Fei and Junghado spring the hero and Dochun from the Talus Dungeon, Dodan follows everyone to Stratus Haven. Dodan is worried for his father and scolds himself for not being of more help.

Dodan follows everyone through the Dragon Pulse into the Shiverstone Range as they flee Talus forces. Dodan and Chengun follow Dochun, Juwol, and Yunsang to the Herbside Inn. However, they are caught off guard around the Explorer's Base Camp by Frost Banshees. Dochun manages to get away, but Dodan and Chengun are taken to the Shrieking Caverns where they are imprisoned in ice pillars to be consumed for Life Force later. The hero arrives to free Dodan and Chengun who are confused and freezing. Chengun escorts Dodan to the Explorer's Base Camp right away to warm up and recuperate.

Dodan is one of the hero's allies that fight during the demon invasion of Zaiwei. He arrives with Yunma Kahn and the rest of the northern forces and helps fight off the demons within the palace. At the Altar of Divine Will, he begs the hero to go help his father whose wounds are reopening from stress. With the world's crisis averted, he returns to Bamboo Village with Chengun. 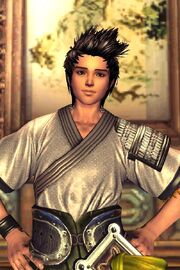 Despite feeling unprepared to take on the role of Bamboo Guard Captain, Dodan tearfully bids his father farewell on his search for Namsoyoo and does his best to manage his father's responsibilities. The Bamboo Guard are unsure of his leadership skills, but follow his lead anyway.

When the hero returns to Bamboo Village to seek a doctor for Jinsoyun, Dodan is in the midst of fighting off the Blackram East Fleet led by Vice Admiral Poharan. He is puzzled why the Blackram suddenly reneged on their truce. The hero explains to that the Blackram are after the hero themself.

With the Blackram crisis averted, he joins the hero at the Healing House where he explains that Sandstone Refuge requested backup from the Bamboo Guard. Due to all the repairs that needed to be done after the Blackram attack, he is unable to leave the village and asks the hero to go instead. He assures the hero that he will look after the hero's disciples while they are away.

Dodan asks for the hero when a rock, with a mysterious letter attached, flies through his front door. The letter asks that the hero go to the lighthouse and signal with the beacon there in order to find the kidnapped Jinsoyun. He is ready to help the hero with the Bamboo Guard as backup, but the hero declines, saying that the letter specifically requested to come alone.

Feeling that he ought to help anyway, he takes a group of Bamboo Guard up to the lighthouse where they see a masked stranger speaking with the hero. The stranger flees as soon as they see Dodan and the Guard arrive. Dodan apologizes for his rash actions and admits that he feels inadequate as Bamboo Guard Captain. However, when the hero asks how to get to Gunwon City, Dodan suggests speaking with an old friend of his father's, Gunwon Garrison Captain Bak Murang, in the Tomun Range.

Dodan is surprised to see the hero back so quickly and disappointed that Bak Murang was unable to get the hero to Gunwon City. He chides himself for not being of more help. He figures if the land route to Gunwon City is closed, there may be a way into the city by sea through Faircloud Harbor. Dodan is startled when the hero proposes working with the Blackram for passage, but creates a Dragon Pulse to take the hero to the E. Fleet Supply Chain. He does mention whether it is wise to take the hero's disciples, but agrees that he would rather not have to watch the mischievous bunch of children.

Act 1: Into the Woods