Dochun (Korean version: Do Cheonpung) was the Captain of the Bamboo Guard in Bamboo Village. He is highly respected as a martial artist and previous student of the Hongmoon School with many loyal Bamboo Guard members at his command. His family includes his son, Dodan, and his adoptive daughter, Namsoyoo.

At some point, he enrolled at the famous Hongmoon School, studying martial arts under Hong Sokyun. He left the school and became a Royal Stratus Guard to Stratus Empress Namsolyn. While the Empress and his superior, General Yunma Kahn, were visiting Stratus Haven, Dochun comes to warn them of mysterious assassins from the Ebondrake Cult. He, along with the Empress's new bodyguard and Yunma Kahn, fight off the attackers. While his friend Lieutenant General Gubong and Yunma Kahn escort the Empress to safety, Dochun and the new boyguard run into the burning Stratus Annex building to rescue the Empress's infant daughter, Sup Soyoo.

Fearful of the princess's safety, the Empress entrusts her daughter to Dochun who fakes the infants death, renaming her Namsoyoo. The infant is brought to Songshu Monastery for several years until Dochun formally adopts her and takes her to Bamboo Village. Out of fear that Namsoyoo would attempt to leave Bamboo Village or be discovered again by the mysterious Ebondrake Cult, he never told Namsoyoo of her royal heritage. 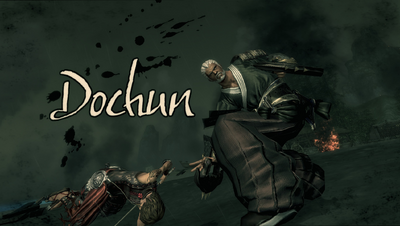 At the very beginning, Dochun notices a fire blazing upon Heaven's Reach and takes a boat out to see what is happening. A beacon of light shines from the ocean, leading him to the hero's unconscious body. After fishing the hero from the water, he brings them back to Bamboo Village to be treated at the Healing House.

A couple days later, the Blackram Marauders invade the beach again and he goes out to fight them off. The hero awakes and goes to help the Bamboo Guard fight off the Blackram while rescuing fallen soldiers. Dochun is relieved to see the hero awake and reveals that he was once a Hongmoon student too. He is saddened to hear that the Hongmoon School was massacred along with Master Hong. He recognizes Jinsoyun's name and recalls finding the betrayer Lusung unsettling during a meeting long ago. He asks the hero to assist the guard in fighting off the Blackram while he goes and investigates Jinsoyun. He names the hero "Jyan", explaining that it describes someone with great potential.

While the hero assists Dochun's son, Dodan, with blowing up the Blackram ships, Dochun sends some of his scouts to look for signs of Jinsoyun. When the hero returns, he introduces his family and allows the hero to recuperate within the peaceful village. He later asks the hero to deliver a message in place of Dodan to Bamboo Village Mayor Daygu in Everdusk. While pursuing Jinsoyun through Whalesong Cove, the hero encounters Dochun in the Tainted Grotto, who had come to fight off the everything that had mysteriously been tainted with Dark Chi. He expresses concern about the recent rise in Blackram activity and that there may be a spy within the Bamboo Guard. He asks the hero to come meet him at the Tanjay Kilns in Gloomdross Forest where more conflict is arising. After notifying the hero of a potential Jinsoyun sighting, he runs back to Bamboo Village to handle the spy issue.

He meets again with the hero at Songshu Monastery and is disheartened to learn that Bumbak is the spy within the Bamboo Guard. He asks the hero to investigate the Lair of the Yutay to determine Bumbak's whereabouts. When the hero returns to report back, Dochun notifies the hero that Namsoyoo had been kidnapped by the Blackram while he had been away. He suspects another spy within the Guard and goes to Bamboo Village again to handle the situation. Shortly after the hero discovers Namsoyoo at the Blackram Narrows and has her return to Bamboo Village, the village is attacked by Captain Gwon and his fleet. Dochun looks after Dodan who is severely injured in the attack, while the hero goes to stop Gwon and rescue Namsoyoo.

After Gwon retreats with Namsoyoo in tow, Dochun reads the letter written from Bumbak to Namsoyoo, detailing the assistance she provided for the Blackram. While he stays behind in Bamboo Village to help rebuild and recuperate, he sends the hero to his associate, General Han Sirang, who has news of Jinsoyun sightings in the Cinderlands. He asks that the hero contact him should they find Jinsoyun.

Dochun isn't seen again until the Zaiwei Arc, where he competes in the Royal Martial Arts Championship for a chance to speak with Namsoyoo, who had been taken to the capital to be made an empress. He makes it to the championship finals where he is surprised to see the hero again. He explains that he could not just sit idly by while Namsoyoo was in so much danger being close to Jinsoyun. He entered the competition to get close enough to reason with her. When the hero wonders why he still cares about Namsoyoo, he expresses that he still sees Namsoyoo as his own daughter and refuses to give up on her, regardless of her actions. He requests the hero forfeit the match but understands the hero's motives to win in order to reach Jinsoyun. Despite losing to the hero, he runs up to the Emperor's seat and calls out to Namsoyoo, who has Dochun immediately arrested and thrown into the Talus Dungeon.

After Jinsoyun severely wounds the hero and throws them in the Talus Dungeon to die, Yunma Fei and Junghado arrive in the dungeon to free the hero who in turn frees Dochun in the cell across from them. He worries about the hero's grave injuries. Dochun and the group move forward in the dungeon to free Yunsang and Juwol as well before they use the secret exit to get to safety. Within the exit, they discover a strange prisoner wearing an iron mask before being attacked by Gubong. As Gubong is about to inflict a fatal attack upon the hero, Dochun takes the blow instead, leaving a deep wound in his shoulder. When Gubong accidentally knocks off the strange prisoner's iron mask revealing the latter to be the true Talus Emperor, Yunma Kahn, Dochun kneels in amazement at meeting his long lost friend again. Dochun and the other help take the unconscious hero out of the dungeon to safety at the Snowforest Monastery.

Dochun waits for the hero at the pagoda in Stratus Haven. He is surprised to see the hero recovered so quickly with their Chi purified, but saddened to realize that the Eight Masters had given their lives in order to do so. He reminds the hero that the path to defeating Jinsoyun is within their Hongmoon teachings. He expresses deep concern that Namsoyoo's life is at stake on top of the entire world being in jeopardy. He explains to the hero his connection to Namsoyoo by recounting his past as a young member of the royal guard serving under Empress Namsolyn. He still has not figured out who sent the assassins but still feels responsible for Namsoyoo's safety being duty-bound to the Empress and seeing Namsoyoo as his own daughter. Shortly afterwards, the Talus rangers, on orders from Jinsoyun, tracked the hero and their friends to the Monastery. Priest Hyundam opens a Dragon Pulse through which everyone could escape except the hero who stays to fight back the Talus.

In the Shiverstone Range, Dochun travels on ahead with Dochun and his friend, Chengun, to look for herbs for the wounded. With the Talus Dominion on a manhunt for them and Dochun still recovering from his shoulder wound, the hero arrives at the Herbside Inn to discover Dochun with his wound reopened and Dodan and Chengun kidnapped by Frost Banshees. At the Explorer's Base Camp, Dochun looks after Dodan and Chengun after the hero rescues them, charging the hero to protect the Emperor at Silverfrost Citadel in his stead.

Dochun arrives with Yunma Kahn and the northern forces within the Zaiwei Palace while the Divine Mandate Ritual is underway. Dochun fights off the demons as Yunma Kahn, Yunma Fei, Gubong, and the hero battles the Imposter Emperor. Dochun joins the hero at the Altar of Divine Will to stop Jinsoyun. He sees Namsoyoo and rushes to save her, but the ritual releases a blast which forces him back and reopens his wound. The hero attempts to save Dochun by infusing him with Chi but his wounds are too severe. Despite his protests, the hero gives up all of their Chi to restore Dochun and all their allies, thus achieving the full power of the Hongmoon Arts. Dochun marvels at the hero's accomplishments and wishes them luck as they ride the Dragon Pulse to face Jinsoyun. Dochun awaits the hero's return in Zaiwei. Dochun commends the hero on their accomplishments and entrusts the hero with continuing the Hongmoon teachings. Dochun explains that he continues his search for Namsoyoo who disappeared during the Divine Mandate Ritual.

The victory is short-lived as the hero and Dochun receive news from a Bamboo Guard Militia Fighter that they found Gubong outside of Northreach. Dochun and the hero quickly rush over where the wounded Gubong tells them of the Ebondrake's sudden resurgence. Dochun had heard similar rumors while searching for Namsoyoo in Zaiwei, but is surprised to learn that it was all true. He fears that they will seek out Namsoyoo again as they did when she was an infant. He tends to Gubong while the hero goes in search of clues as to the Ebondrake Cult's plans.

In the Lumang Forbidden Dungeon, he and other Bamboo Village Militia fight the Ebondrake to stop them from taking Yura for their evil plans. He is dismayed to learn the extent of the Ebondrake's reach, having connections to the Stratus, Talus, and even the Lumang. He fears they are going to use Namsoyoo as part of their plot to bring the Dark Lord to the Earthen Realm. Back a North Reach, Dochun is surprised to find Gubong, the only person with information on the Ebondrake, missing. Shaking off the feeling of the oncoming evil, he relays to the hero strange news from Gwak Chil in Bamboo Village that people are flocking to Heaven's Reach, responding to a strange call for students. He suspects that it's just a prank, but suggests the hero look into it anyway.

Dochun waits for the hero to return to Zaiwei outside of the Royal Chambers, explaining that he had intended to see the hero sooner, but the hero had left for the Shiverstone Range already. He informs the hero that he had received a letter from Jiwan, asking that the hero look after a young, purified Jinsoyun. Though he is conflicted at first, he also agrees that only the hero would know how to properly guide and protect Jinsoyun. He fears that if anyone were to learn of Jinsoyun's true identity, her life would be in great peril. He takes Jinsoyun to the Snowforest Monastery for safety as the hero ponders what to do with her. In the meantime, Dochun asks that the hero look into the strange Hongmoon recruiting advertisements circling Zaiwei.

When the hero joins Dochun at the Snowforest Monastery, the new Eight Masters have already discovered Jinsoyun's real identity and come to kill her. Dochun is outnumbered and outmatched, however he plans to protect Jinsoyun whether or not the hero will. He expresses his regret for leaving the Path of Hongmoon and for encouraging the hero to pursue revenge when they first met. He feels that it was his fault that the Hongmoon School died and the thought filled him with despair. He stands back as the hero goes to fight off the Eight Masters. He nods in approval when the hero finally takes up their mantle as the new master of the Hongmoon School and watches as the hero takes Jinsoyun, Ryu, Bunyang, and Bunah to Heaven's Reach.