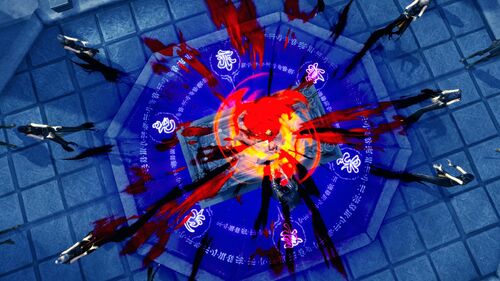 The Divine Mandate Ritual being performed by Jinsoyun and the Dark Seers.

The Divine Mandate Ritual is an ancient practice of calling upon the Heavens to vindicate an emperor's right to rule.

The ritual requires large quantities of Soulstones, the blood of a Divine Being, a "dimensional anchor" or "key", some form of human vessel, and must occur on the day of an eclipse. The ritual is supposed to call upon the heavens and channel their will through the vessel to proclaim the rightful ruler. However, in the absence of a dimensional anchor to focus the ritual, it easily goes awry. It is heavily warned that the ritual should not be taken lightly; that when the proper preparations are not made, the attempt at harnessing so much cosmic energy would cause disaster.

It is a closely guarded royal secret passed down in the Book of Creation from the Naryu Empire when it was first used. Therefore, any descendant of royalty from the Naryu Empire would have divine blood. The ritual is usually performed when an ruler dies and a direct successor to the throne is not designated. However it had not been used for thousands of years since the beginning of the Naryu Empire.

Thirty years ago, Prince Sogun of Highland Central, who felt that he deserved to be Emperor over his younger brother, attempted to perform the Divine Mandate Ritual to proclaim himself as rightful Emperor. Yura, who had become the prince's favored handmaiden in the Highland Palace, gave him instructions on the ritual but left out important details. Thus, when the ritual was performed, a gate to the Dark Realm opened within the Palace, flooding the city with Dark Chi and demons. Prince Sogun attempted the ritual within the Royal Treasury but was left with nothing as Yura left him once the Dark Chi overtook the city. Prince Sogun had enough Soulstones and the royal blood of his sister, Princess Solaan, however did not have a dimensional anchor nor a proper vessel.

In recent events, Jinsoyun had been building up to perform her own Divine Mandate Ritual, this time with all the proper components. But she would purposefully open the gate so that it would open to the Dark Realm and summon the Dark Lord instead. She used the Talus army to take control of the Brightstone Soulstone Mine and forced laborers to chop down the Primeval Forest to create the Altar of Divine Will. She killed Hong Sokyun for the Twilight's Edge which would act as the dimensional anchor. She then took the unsuspecting Namsoyoo, who was unaware that she was the daughter of Stratus Emperor Wan, to become the blood sacrifice. She had hoped to use the hero who had survived the Mark of the Black Rose as a vessel, but after discovering that Mushin had corrupted the hero's Chi, opted to use Yunwa as the vessel for the Dark Lord instead.