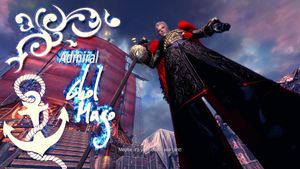 Admiral Chol Mugo is the founder of the Blackram Marauders and heads the southern fleet of Blackram flag ships. He delegates from his flying ship, the Iron Shadow.

Prior to becoming the leader of a band of pirates, Chol Mugo used to be a Stratus General and personal advisor to the Empress Dowager of the Stratus Empire within the Dasari Palace. He witnessed something troubling within palace walls which prompted him to resign and go into hiding. During the wane of the Stratus Empire, Chol Mugo united a roving bands of pirates and petty thieves into the Blackram Marauders, named for his flag ship, the Black Ram.

The Blackram then went from pillaging merchant vessels and raiding coastal villages to more lucrative businesses in espionage, smuggling, and slavery. With their alliances with land-based bandit groups, the Blackram's influence reached unprecedented levels. Admiral Chol Mugo was aware that controlling a band of mercenaries would fall apart if he ruled over them with an iron fist. He deemed it acceptable that as long as each group of the Blackram paid regular tribute, they were free to operate autonomously.

Aiming to be different from the ways of the Stratus Empire, Chol Mugo promoted men and women based on merit rather than on family background or socioeconomic status. He would recruit membership through the four continents as the world continued to fall to corruption and fighting.

The Iron Shadow had been out of commission as it was no longer able to fly. Chol Mugo sent his one of his agents, Dokgom to go scout within Gunwon City to find a way to power the ship again.

Once the hero arrives with the Chondra Crystal and their friend, Ku Yang, Chol Mugo gives the order to lift anchor and take to the skies. He flies the Hongmoon hero and their students over the Dasari Palace where Zulia and the hypnotized Eight Masters have Jinsoyun hostage.

He later comes to gather the unconscious Hongmoon hero and their students after the battle with the Dark Vicar and Zulia. He explains that he had heard of Zulia's raid on Heaven's Reach and offers his ship as a safe haven for the hero and their students. He mentions that he has the Dark Vicar subdued within the ships prison bilge, though he recalls seeing his face somewhere in Zaiwei.

When the hero decides to travel to Zaiwei to find clues on how to wake Jinsoyun, Chol Mugo offers to have Dokgom send a letter ahead of the hero to ask for aid from the royal doctors. Though uneasy about sending the Dark Vicar off with the hero to Zaiwei, he prepares him for transport anyway, promising to look after Jinbin and Jinsoyun on the Iron Shadow while the hero is away.