Atop a Lonely Mountain

Atop a Lonely Mountain is the 30th chapter of Act 4: The Cost of Revenge in Blade & Soul where the Hero makes their way to Silverfrost Citadel to aid Yunma Kahn and his allies in finding Dawnblade, which was last left with Kahn's friend, Baekmuki.

"It's up to you," Baekmuki said with bloodied teeth.

He squeezed Yehang's shoulder as he stumbled to the steps at the base of Jiwan Peak. Blood stained the snow behind him.

"I'm coming, Jiwan," he whispered before collapsing. Snow drifted and settled over his corpse.

"Jiwan loved you," he spat. "And you killed her! Your filth will never be allowed to enter the holy place! To arms!"

The Silverfrost warriors readied their blades and surrounded Jinsoyun. They all knew the story, the story of how Jiwan took pity on a poor ragged girl and raised her as a daughter. In return, Jinsoyun had now killed her master and stolen the Twilight's Edge. The Silverfrost Clan had failed to protect Jiwan that day. They vowed to never fail her again.

"Kill her! Leave no trace!" Yehang cried. All the Silverfrost warriors charged Jinsoyun at once.

"Judging by the look of things, I fear Baekmuki has met the same fate as the others in Silverfrost. Yes. He was the founder of the Silverfrost Clan, and a friend. Before I was taken to the Talus Dungeon, I asked him to hold my weapon to protect it from falling into the wrong hands. With the Royal Seal and Dawnblade together, no one will question that I am Yunma Kahn. I would suggest looking for Baekmuki's body first. He would have given his life to protect the weapon."

After getting Chief General Byunga back on his feet, the Hero ventures onward to Silverfrost Citadel to assist Yunma Kahn, Junghado, and Yunma Fei in finding Dawnblade, the sword of the Emperor. From Northreach, head outside the gate into the world instance, then head west until you hit a crossroads, then south until you hit another crossroads, then north-east up some stairs along the hill path. 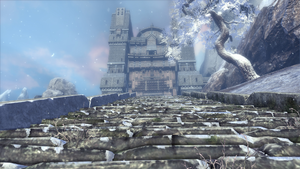 As you make your way towards Silverfrost Citadel, the Hero will come across illusions of a strange girl, who reveals to be one of Jiwan's students. Continue heading up the hill path until you reach the Silverfrost Citadel instance. Head through the portal.

Within the walls of Silverfrost Citadel, Yunma Khan, Junghado, and Yunma Fei will be found fighting Spirits of Silverfrost School. Assist them by eliminating all the spirits.

After banishing all the Silverfrost spirits, talk to Yunma Khan.

Yunma Kahn: "Thank you for helping us. I... I am not as young as I used to be. Judging by the look of things, I fear Baekmuki has met the same fate as the others in Silverfrost."
Hero: Baekmuki?
Yunma Kahn: "Yes. He was the founder of the Silverfrost Clan, and a friend. Before I was taken to the Talus Dungeon, I asked him to hold my weapon to protect it from falling into the wrong hands. The Dawnblade is the sword I had forged to commemorate the founding of the Dominion. I never went into battle without it. With the Royal Seal and Dawnblade together, no one will question that I am Yunma Kahn. Then, we can truly begin the work of freeing the Dominion from the grasp of Jinsoyun."
Hero: How do I find the weapon?
Yunma Kahn: "I would suggest looking for Baekmuki's body first. He would have given his life to protect the weapon."
Hero: Have you seen a girl in white near here?
Yunma Kahn: "A girl in white? No. I'm afraid I haven't. I doubt there are too many people roaming the wastes. Perhaps... yes. Maybe it was a vision? This place is rife with supernatural energies. You must maintain your focus. If you falter, you will be consumed by the turmoil of the past. Please, your safety is paramount. Even more so than my weapon."

He will tell the Hero about Baekmuki, one of his friends and the founder of the Silverfrost Clan, with whom he entrusted Dawnblade with. Dawnblade was the sword he forged to commemorate the founding of the Talus Dominion, and with the blade, no one would challenge against him not being Yunma Kahn. He reveals that with the Royal Seal and Dawnblade in his possession, no one in the Dominion can deny his right as the true Emperor of Talus, being able to rally the people against the false Emperor and freeing the Dominion of Jinsoyun. The Hero asks Kahn as to where Dawnblade can be found, to which he tasks the Hero to find Baekmuki's body first, since he was the last in possession of the sword.

After finishing the conversation with Yunma Kahn, continue up the steps of the citadel. You will encounter more Silverfrost School spirits on the first platform; eliminate them and move up the second platform, where you will find Swordmaster Yehang. Kill Yehang. 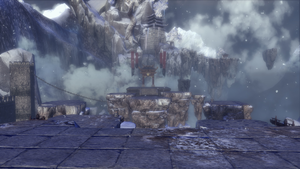 After Yehang is killed, proceed to the Dragon Pulse. Take the Dragon Pulse to the tower platform, where you will find the illusion of the Girl in White. It is revealed that this illusion is that of a young [Jinsoyun]. Approach her, and she will beckon the Hero to follow her and reach Jiwan.

There will be floating platforms split far apart from each other. You will need to Glide, then Air Dash from platform to platform to reach the destination. Upon reaching the final platform, interact with the Dragon Pulse, which is imbued in a giant sword struck into the ground.

The Hero will arrive at the front doorstep of Jiwan's House. The screen will turn black and white as the Hero enters a past memory at Jiwan Peak. Walk inside Jiwan's House. Inside, the Hero will come across Mushin, Jiwan, and young Jinsoyun during a past memory when Mushin betrayed the Four Guardians to claim the Twilight's Edge as his own. Jiwan tells Jinsoyun to run and flee from Mushin, to which he says is a hopeless endeavor. Follow Jinsoyun outside the building and to the peak courtyard, where Mushin, Master Hong, and Iksanun will be waiting.

On arrival, Mushin tricks Master Hong and Iksanun into believing that Jinsoyun killed Jiwan and took her sword. Master Hong is in disbelief, but Iksanun believes Mushin. As Jinsoyun tries convincing Master Hong that she didn't kill Jiwan, Mushin presses forward to attack and kill Jinsoyun. A cutscene will play where Mushin is intercepted by Jiwan, who sacrifices herself to save her. Enraged by her master's death, Jinsoyun fights the Three Guardians using Twilight's Edge, scarring Mushin's face and injuring Iksanun in the process. In his true form, Master Hong unleashes a blast that knocks Jinsoyun off Jiwan Peak, falling to her demise.

After the cutscene ends, the timeline will flash back to the present. The Hero will be standing outside Jiwan's House, with Jiwan's spirit waiting for them inside. Approach and talk to her.

Jiwan: "Your chi has finally become pure enough to commune with me. My name is Jiwan, the Righteous Blade. It's good to finally speak with you after all this time."
Hero: You're the one who's been helping me.
Jiwan: "Indeed. You have been my champion in the hope of stopping the evil Mushin has set in motion. His desire to claim the Twilight's Edge has brought ruin upon the lives of many."
Hero: Jinsoyun has the sword now. 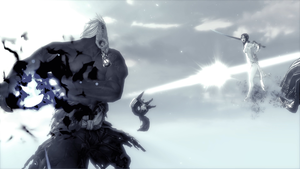 Jinsoyun fights the Three Guardians
Jiwan: "Yes, and she is in danger as well. You saw for yourself what happened in these cold mountains. Jinsoyun has suffered because of Mushin's treachery. He was once a kind man, but he has been consumed by a lust for power since his return. We thought he died when he sacrificed himself to close the first Dark Gate. But he thrived in the Dark Realm and has turned to an evil path. Now he seeks even greater power."
Hero: This doesn't justify Jinsoyun's crimes.
Jiwan: "No, it does not. Jinsoyun has allowed a desire for revenge to consume her, just as you did when you gave in to your darker instincts. Show her the mercy the Eight Masters showed you. Please... save Jinsoyun. Seek justice, rather than vengeance, and put an end to all this suffering."

Jiwan tells the Hero that because their chi is now pure, they are finally able to commune with her spirit. Understanding that Jiwan was helping them the entire time on their path, Jiwan will tell the Hero that they are their champion destined to end Jinsoyun's path of revenge and stop the evils unleashed by Mushin. She asks the Hero to forgive Jinsoyun for what she has done, to which they refuse, but reminds them that they walked a dark path of revenge like Jinsoyun. Just as the Eight Masters have forgiven them, so should they with Jinsoyun.

Finish the conversation with Jiwan, and the quest is complete.